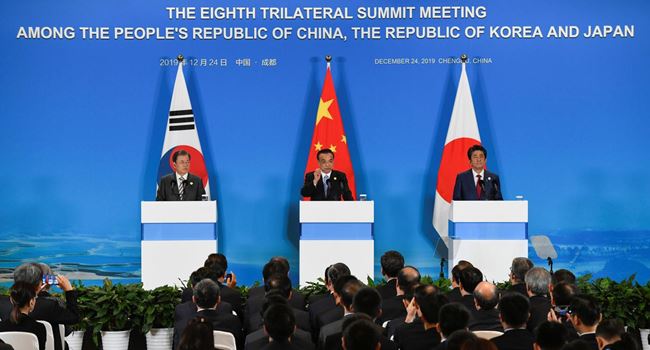 China, Japan and South Korea have agreed to work together to promote dialogue between the United States and North Korea, South Korean President Moon Jae-in said on Tuesday following a summit between the three countries in China.

Pyongyang has set a year-end deadline for Washington to change what it says is a policy of hostility amid a stalemate in efforts to make progress on their pledge to end the North’s nuclear program and establish lasting peace.

North Korean leader Kim Jong Un and US President Donald Trump have met three times since June 2018, but there has been no substantive progress in dialogue while the North demanded crushing international sanctions be lifted first, Reuters reports.

The North renewed its verbal attacks on President Trump earlier this month after he threatened military action.

The country’s foreign ministry said at the time if the US president was confrontational, it “must really be diagnosed as the relapse of the dotage of a dotard.”

The term dotard simply means old and weak or a person whose mental faculties are seriously impaired by old age.

While dotage implies having impaired intellect or understanding in old age.

North Korea had first labelled the US president as old and weak in 2017.

“South Korea, China, Japan, the three countries, agreed to continue close communication and cooperation toward denuclearization and lasting peace on the Korean Peninsula,” Moon said at a joint news conference.

Related Topics:ChinaJapanNorth Korea
Up Next