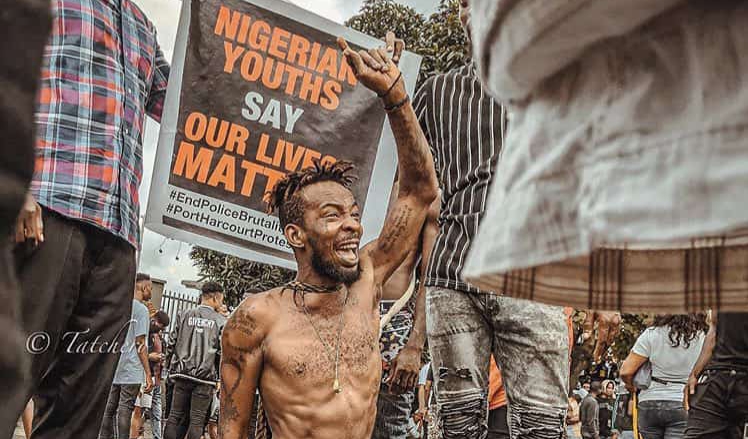 #EndSARS protesters, on ground and across social platforms, continued their agitations on Tuesday, calling for an end to police brutality, and the scrapping of the Special Anti-robbery Squad (SARS) of the force.

Nigerian Twitter users took advantage of the trends to pass comments on various other issues, as they forced deviant influencers to return back on track, and also addressed government at all levels.

The controversial Nigerian Journalist had her name on Twitter trends table for most of the day after she played a fast one on Twitter users who were erroneously jubilating that her account was suspended.

The self-acclaimed nurse, whose recent tweets had been against the #EndSARS movement, would later show up to announce that she had personally deactivated her account.

WARNING to all #EndSARSProtest participant especially YOUTH. Refrain from attacking police during your protests. I am fully supporting @PoliceNG to deal MERCILESSLY with those who attack police. I'm NOT an activist for foolishness. Some of us need police to serve & protect?️??‍♂️?? pic.twitter.com/MQjYWjOk5m

I just checked. Her account is still active.i think she deactivated it pic.twitter.com/ZElDCftHb1

@TwitterSupport DIDN'T suspend my acct. I haven't broken Twitter rules. How can a country full of lies hate 1 person? You reported me over 5000 times and they send me critical ones. List of criminal youth elements, shut down SM during uprising are example. I'm a JOURNALIST duh? pic.twitter.com/eB6mjrZoHt

Rivers State Governor, Nyesom Wike, also trended for most part of the day, following his announcement that the state prohibits the #EndSARS protests.

But #EndSARS protesters who found the move disturbing, did not hesitate to call out the governor for what they considered an infringement of their constitutional rights.

But in spite of the warning, protesters damned the consequences and converged in large numbers at the government house in Portharcourt.

No, Mr governor, you don't have the power to make such declaration. The right of the people to freely assembe is a fundamental one, constitutionally guaranteed. Not even the president can make the declaration you made.

I thought wike is a lawyer to start with.

Baba ,you are joking. You don't have the power to ban the citizens from exercising their constitutional right.

The right to protest is sacrosanct and I wonder where you got your power to ban it from. A life Bencher should know better.

Coming from a Governor who had earlier made this grave allegation? Could it then be that the statement as clearly credited to Gov Wike was/is a political one devoid of any truth? Was it just to get back at the then SARS Commander in the state? A lawyer. A Governor. Really? Okay! pic.twitter.com/fSgYw9boAf

The Hashtag emanated from a viral video by an #EndSARS protester. In the video, the protester was heard calling the president a “bad boy” as she expressed her displeasure over the state of the nation, and the deprivation of her freedom of expression.

“I’m here to protest and they (the police) came with guns. Who do you think you are? You don’t do that. We’ve been peaceful,” she said.

I’ve watched this like 10times already. I Stan this young lady. #BuhariHasBeenABadBoy and lazy Nigerian youths are here to tell him. Get ready this is just a rehearsal of many more to come. #SarsMustGoNow pic.twitter.com/qN0utQ0mIw

She’s a treasure we must protect her at all cost

They joked about using the concuction for bullet proof as they continue with their struggle against the Special Anti-Robbery Squad and against police brutality.

Residents in Ibadan joined the nationwide struggle against SARS and police brutality. Reports from the State were positive as no life was lost during the peaceful protest.

This is not about trending or not trending.
We are all working for a common goal. We see you all ❤️

The newly appointed INEC Commissioner for Delta State, Lauretta Onochie made it to Twitter trends table as Nigerians queried President Buhari for what they considered an “insensitive” decision.

Recall that Lauretta, an aide to the President, had only a few days ago called out Nigerian musician, Wizkid for referring to the president as a old man in a tweet that supported the #EndSARS protest.

She wrote, “It’s not disrespectful to call anyone old. It’s the way and manner Ayo Balogun addressed the president that leaves a sour taste in the mouth. He exhibited crass ignorance, insensitivity and childishness. But hey, he’s a #DumbKidNotWhizKid. When he grows up, he might learn respect”.

Am I the only one who sees Lauretta Onochie's appointment as a full frontal sabotage of the 2023 elections? Is anyone else seeing what I'm seeing? …abi am I running mad.

It was this very lady that said #EndSARS protesters are yahoo boys & criminals. Imagine such a character getting into such a highly sensitive role that requires integrity, truthfulness, patriotism, impartiality, unbiased & apolitical mind. She's square peg in a round hole.

They don't rate us at all!!#SARSMUSTEND#EndSARS

The appointment of Madam Onochie is intended to distract Nigerians from continuing with the #EndSARS campaign. And it seems FG is making progress with that move. Let Onochie be, One step at a time! Let's not back down on the #PoliceBrutalityMustEnd NO DISTRACTION!

It's simple: Her appointment shows all Lauretta Onochie has been doing is strongly supported by the government of the day. This is to "reward" her and put her in a "higher" position where she will "serve" them better. But disaster will befall them before they know it!

This is the height of insensitivity, recklessness and carelessness by the Buhari regime.