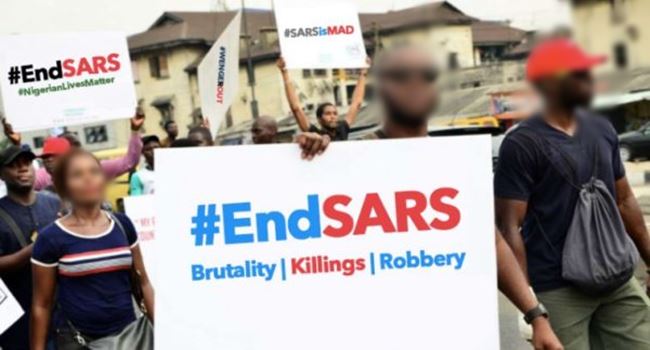 #EndSARS protesters, on Monday, took a more dogged approach in their agitation for the scrapping of the Special Anti-Robbery Squad (SARS) of the Nigeria Police.

There was also no slowing down on the conversations across social media, with multiple hashtags and phrases emerging at the top of Twitter trends table as users aggressively pushed the narrative.

The hashtag began to trend at the early hours of Monday morning after angry protesters obstructed movement at the toll gate in Lekki express.

The action forced the Lagos State governor, Babajide Sanwo-Olu to the scene. But he was booed by the protesters who refused to pay attention.

Sanwo Olu didn’t show up until they blocked the airport road and his rich folks from leaving Lekki.
Remember that when he come back for our votes!!

The hashtag dedicated to President Muhammadu Buhari began to trend after the president failed to address protesters after days of massive demonstrations nationwide.

However, few hours after the hashtag trended, the president in a one minute address to Nigerians acknowledged the “genuine grievances” of the protesters, stating that the disbanding of SARS was only a step to total police reforms.

https://t.co/2dor4jktF7
Just now mr president after ur speech somebody was drop dead by SARS 😭😭 haaaaaaaaaa

Baba , the bad eggs in the police are not few. We can't keep repeating these lines every time. The entirety of the police reeks of filth.

It was a bloody Monday for residents and #ENDSARS protesters at the Surulere axis of Lagos, as officers of the Nigeria Police sprayed bullets to chase protesters, leaving one dead and three injured.

What happened to using rubber bullets??🤦‍♂️ @PoliceNG it's a peaceful protest ffs.!!!

“I didn’t protest, I was there to calm my fans down” was the statement that got Davido trending on Twitter.

Protesters called out the ‘FEM’ Crooner for allegedly denying them during a closed door meeting with the Deputy Commissioner of Police and PRO, Frank Mba. The singer however got support from fans.

Stop this…. he chickened out yesterday as well.. I was there, I was right in front with him at the policeheadquarters. He stylishly moved away from the protest while everyone were still standing in the face of police intimidation. God bless Aisha Yesufu.

Retweet this to appreciate @Davido for coming out to associate with Nigerians during #SARSMUSTEND protests and shame those sons of Belial who are spinning his wisdom as cowardice and his diplomacy as hypocrisy. If my son behaved as Davido did at that meeting, I‘d be PROUD of him!

Dbanj made the trends table after #EndSARS protesters called him out for ‘hypocritically’ standing against police brutality after his alleged use of the force to obstruct justice during a rape scandal involving him, four months ago.

Loooooool.. Dbanj that use Police to scuttle a Rape Case? Sega that is a paid agent of Police? Korede a Police Ambassador?? This is madness

Dbanj was accused of using Police to intimidate a victim, of course he's there. https://t.co/LnLAWJeKHo