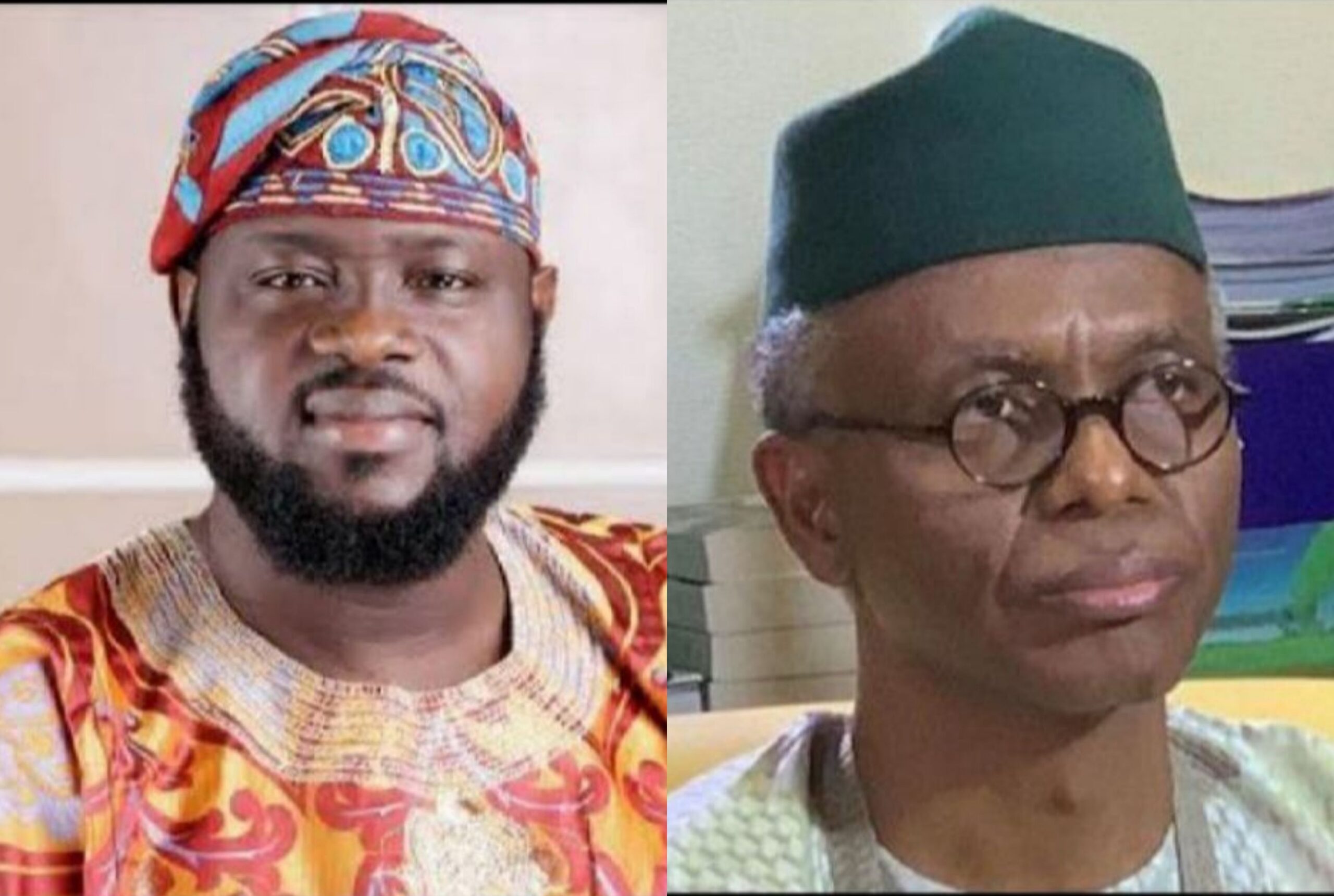 The social media space on Tuesday was awash with reactions to the arrest of Abidemi Rufai, an aide to Ogun state governor, Dapo Abiodun by the United States’ Federal Bureau of Investigation (FBI) over a $350,000 unemployment benefit fraud.

The now suspended aide was reportedly arrested on Friday evening, at the John F. Kennedy International Airport in New York on his way out of the US, based on the criminal allegation.

He is scheduled for a detention hearing on May 19 and may bag a 30 years jail term if found guilty of the allegation levelled against him.

His arrest is coming barely a year after Instagram influencer, Ramon Olorunwa Abbas, popularly known as ‘Hushpuppi’ was arrested in a raid conducted by the FBI, Interpol and Dubai police over £350m cyber scam.

Meanwhile, some Nigerians on social media are also of the opinion that Nigerian leaders are the real ‘yahoo boys’.

Governor Abiodun’s aide and “Lekki big boy” Abidemi Rufai aka Sandy Tang has been arrested over a $650m COVID-19 unemployment fraud in the U.S. He was arrested at JFK airport as he tried to leave the US. pic.twitter.com/x8dfoEFMFg

Abidemi Rufai, Senior Special Assistant to Ogun State Governor @dabiodunMFR "used the identities of more than 100 Washington residents to steal more than $350,000 in unemployment benefits from the Washington State Employment Security Dept during the COVID-19 pandemic in 2020". pic.twitter.com/u4xvbqAP3H

Leadership selection in Nigeria is horrible. Scammers, Drug Lords, Human Traffickers, have hijacked the Government at all levels. They go into politics to clean their Dutty Money

Hushpuppi & Abidemi Rufai could become Governors of their respective States, if they weren’t caught.

From Hell rufai to Abidemi Rufai.

Rufai is under attack locally and internationally

The person drafting this dragging timetable is a legend.

This tweet is for those engaging in credit card fraud. You can continue stealing from the U.S but one day , you will get caught. They will carry out their investigations and nail you when you least expect it. Abidemi Rufai is just one of the many guys that will go down. pic.twitter.com/tn93y74JyO

When u start making money legally, u will understand that flaunting wealth on social media is not a habit of Successful people but from those who Escaped Poverty Dubiously!!!
Abidemi Rufai, Osogbo, Igbo, Ordinary President, #HarassBuhariOutOfParis

Social media users are calling out Kaduna State governor, Nasir El-Rufai for declaring the president of the Nigerian Labour Congress (NLC) Ayuba Wabba, wanted, and insisting on his arrest and prosecution.

The Governor, in a Twitter post made via his official handle, accused the labour president of Economic sabotage, punishable under the Miscellaneous Act Offences, insisting that Mr Wabba must report himself to the nearest police station for prosecution.

El-Rufai while fielding questions from journalists at an event on Tuesday maintained that there was no going back on his decision to sack workers, adding that the state was not ready to reach a compromise with the labour union.

“Yes you saw my Twitter handle post. They have attacked facilities and engaged in economic sabotage. That is an offense under the act of the miscellaneous act. And we will bring him to justice.

“We are looking for him. he should report himself to the nearest police station or report to us. he will be prosecuted for economic sabotage,” said the Governor

But Wabba has already termed el-Rufai’s actions as an ‘abuse of power’.

The union began their five-day warning strike on Monday to protest the mass sack of workers in the state by the el-Rufai government.

Twitter users have, however tagged el-Rufai’s handling of the situation as tyrannical, with the following comments:

This was El-Rufai protesting with organized Labour in 2015. Now this is Kaduna Little Hitler declaring NLC President; Ayuba Wabba & others wanted, for simply leading a PEACEFUL protest in Kaduna. Abacha will be a SAINT where this midget is. Hell Rufai will set Nigeria on fire🔥🔥 pic.twitter.com/c0Fw11o1RC

Declaring someone on your streets protesting "wanted" has to be the highest expression of clownery. Elrufai go outside, you'll see Ayuba Wabba.
Werey.

If Ayuba Wabba gets arrested, the strike should be nationwide.
No man has monopoly of violence.
El rufai the failure https://t.co/2Iyg8mtkzK

El-rufai refused to negotiate with bandits to free those his incompetence couldn't secure, but placing a bounty on Ayuba Wabba and other NLC members for leading Kaduna workers on peaceful protest.

The issues at stake in Kaduna are bigger than Ayuba Wabba and the NLC.

The man El Rufai can survive 150% outside your political environment and he's very much aware of that and refused to be blackmailed..the anyhowness in Nigern pub service will nt be corrected by political correctness, only leaders who do not care abt the next elections will fix it

Of all the things El-Rufai will do as governor, reducing the size of the civil service is the most predictable. He’s made that argument in his books and articles for years. Those who voted him knew what they were voting for. What some see as governance, others see as politics. pic.twitter.com/JQf9aP5ulf

Mixed reactions have trailed the action of a Radio Personality, Ahmad Isah, also known as ‘Ordinary President’, who on a viral video was seen hitting a woman during an interview.

In the trending BBC Africa Eye documentary, Isah took to assaulting the woman who was accused of setting her 10-year-old relative on fire for alleged witchcraft.

She allegedly tied the victim’s hands and feet, poured kerosene on her head and set the girl on fire.

When asked repeatedly by the Brekete Family host how she confirmed that the girl was a witch, she replied: “Nobody. I don’t know what came over me”, insisting that she didn’t know how it happened.

The Human Rights Activist immediately lost his cool and slapped her twice.

Some social media users have thrown their weight in support of his actions while others kicked against it, noting that he was wrong to have hit the woman.

Those of you foaming at the mouth about Ordinary president slapping that demon. Please look at the damage she caused. This girl might not grow hair on her head anymore without surgery. pic.twitter.com/t3AxmokIxu

She tired a girl.

Poured kerosene on her and set her ablaze.

Such a woman the moment she reduced the dignity of the girl also lost her dignity and any form of rights.

She deserved every slap Ordinary President gave her and more.

She deserves no respect or dignity.

If you're in Abuja, you'll agree with me that ordinary president is a good man. The slap is not compared to what the lady and her husband did to that child. Professionally, he is wrong tho. Omo this kind slap go make you see stars😂😂😂
My one and only Ordinary President🙌🙌

This country is how it is because we don't have more people like Ordinary President Ahmad Isa who are ready to slap sense into you people. That slap is more justice than most Nigerians ever had. So miss me with that faux outrage abeg. Free my dawg!!! ✊🏾

Not long ago a Man was tied to a tree and flogged mercilessly for beating his mother and you all cheered but because Ahmed Isab ordinary President Slapped that lady that pour kerosene and set a kid on fire you are now blaming him what a hypocrite. Look at the girl pic.twitter.com/thebXhgP2N

The Economic and Financial Crimes Commission (EFCC) also trended on Tuesday following the brewing tension in Oshogbo, the Osun state capital after youths in the state stormed the streets to protest the mass arrest of suspected internet fraudsters, popularly known as ‘Yahoo boys’ by the anti graft agency.

Ripples Nigeria gathered that EFCC operatives had on Monday night raided the areas of Adetunji Estate and Hallelujah Estate in search of suspected internet fraudsters, but youths in the area prevented them from carting away vehicles belonging to the suspects.

The development led to the youths staging a protest around Lameco Junction and Dele Yes Sir Junction with bonfires and road blocks.

The mass protest is said to have caused heavy gridlock in all the roads adjoining the junction.

See how Nigerians have also reacted to the development:

This is how EFCC officials broke into the house of suspected fraudsters!
“Suspected” in quote!

Now tell me; who are the real criminals here?
This is so unfair to the citizens of this country! pic.twitter.com/nnOSH4V91Z

We’re just recovering from the monumental economic loss occasioned by the #EndSARS protests of last year, & the EFCC is already triggering another round of agitation. Somebody better tell them that Nigeria can not afford another mass protest with the prevailing security challenge pic.twitter.com/vlsaz0EwJn

Delta gov dissolves cabinet as talks on 2023 election stir up