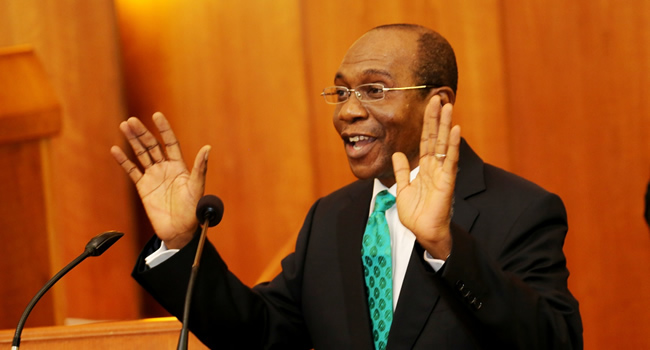 Amid calls for the extension of the deadline for the return of old naira notes, the Governor of the Central Bank of Nigeria, Godwin Emefiele, has insisted that the bank will not extend the January 31st deadline.

The persistence of the governor on the deadline amid several challenges Nigerians are facing in swapping the new notes with old ones, has gotten people talking.

Godwin Emefiele got this one right, anyone against the Naira redesign is a Terrorist.pic.twitter.com/zQQp60Bu21

I stand with Godwin Emefiele on January 31st deadline of new currency. The politicians fighting this are just interested in vote buying.

I don't have good news for those who feel we should shift the deadline; my apologies
The reason is b/c 90 days should be enough for those who have the old currency to deposit it in the banks…"
Godwin Emefiele (Gov of the CBN)
Me: I thought Femi Falana said DSS wants this man? pic.twitter.com/KY3f0rLM7W

Godwin Emefiele is the worst CBN governor ever. God forbid!

Dear Godwin Emefiele the CBN governor, it is true that the banks were open on weekends to receive the old Naira notes but the challenge is that a lot of banks nationwide have refused to provide the new Naira notes to the public! Many ATMs are still dispensing the old Naira notes.

Nigerians have also been talking about the alleged forceful shutdown of markets and shops in Delta state by the vice-presidential candidate of the Peoples Democratic Party (PDP), Governor Ifeanyi Okowa.

Governor Okowa, during the campaign, claimed Delta remained Atiku’s second home because he has numerous friends in Delta State where massive votes could be assured.

It was learnt that the shutdown of markets was in a bid to mobilize Deltans to the campaign ground to show solidarity with the PDP in the state.

So Okowa closed all the market in Asaba today for PDP campaign rally?

Ifeanyi Okowa is forcing market women to close there shops to be at the PDP rally in Asaba today!! @IAOkowa rally is not by force!!!! Asaba is obidient @blessed4ever_10 @JosephOnuorah @itzz_blitz1 @Jack_ng01 @_weyimi @ChudeMedia @chude__

Not quite. Okowa closed markets and rented crowds. It doesn't work. No be me talk am O.#PeterObiForPresident #VoteLP #ObiDattiInKatsina pic.twitter.com/33KjDVTqR4

Everyone here has been paid. I heard Okowa locked up all the markets and used cane to chase our mothers to go for this rally. Some other people were led to the venue at gunpoint. These are the forces we are against. We must vote out the old order next month. New order ti de https://t.co/PgfL9nEek9

Okowa shut down markets for this rally and chose to dress women in RED to show his popularity. 🤣🤣🤣🤣🤣🤣🤣🤣.

When okowa forced market women to close shops. Even secondary school students were moved to the campaign ground.