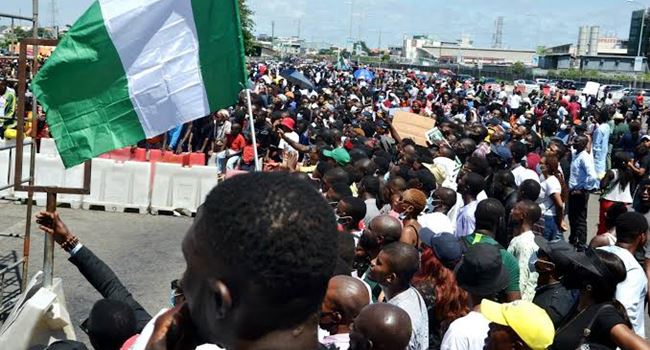 A new investigative report concerning the October 20 shooting of #EndSARS protesters by military men at the Lekki Toll Gate, emerged on Wednesday and got the social media bubbling, as the report backed numerous eyewitness accounts.

The #EndSARS and #EndBadGovernanceInNigeria hashtag made a return to the trends table on Twitter as a result, but the following trends were the major aspects of the conversations:

The America-based news television, in a documentary aired early Wednesday, made more revelations about the Lekki toll gate shooting of EndSARS protesters, as it confirmed that live rounds were fired directly at peaceful protesters by the Nigerian Army.

Recall that the Nigerian military had claimed they only used blanks, and fired in the air.

But video footages from the report, which were also a confirmation of eye witness accounts on social media, showed multiple deaths, several injured protesters and testimonies from families of victims of the shooting.

The report also traced the live bullets fired to weaponry dealers in Serbia where Nigeria was said to have annually purchased ammunition between 2005 and 2016.

The emergence of the investigation raised old dusts and brought hashtags like #EndSARS and #LekkiMassacre back to top of discussions, garnering massive engagements.

The CNN footage is very well documented. I also love the fact that they went ahead to run an investigation even after Buhari told the international community to mind their business. It's human lives taken for absolutely nothing & someone has to answer for them.

The CNN investigation have laid to rest every contentious issue about the massacre of #ENDSARS protesters at Lekki.

Our work rn is to follow bumper to bumper anybody who tries to drive a narrative that our heroes weren't shot dead by the leprous govt.

We must never forget

We have been waiting for investigative reports from their committee for over a month now…they keep tossing to and fro with poor lies. Now this one from The CNN will confuse them the more because the report they were preparing was different…now they have to start up again.

Then they will apply to borrow money to 'build' Nigeria. Monkeys.

Governor of Lagos State, Babajide Sanwo-Olu came under fire following the report published by CNN Africa on the toll gate incident, as the Governor had earlier claimed that only two demonstrators were killed during the shooting.

Sanyo Olu claimed power beyond his control gave the order

Sanwo Olu: it was the Army.

The Army: we weren't at Lekki Toll gate.

The Army: we were there but shot in the Air.

It's Jide nau. Ok, they will find one military guy to throw in…just to sweeten the pudding & get Adesina to come out & write how the uprightness/integrity of his 'master' made it possible…OR they'll just write "FAKE NEWS" & tell CNN to "Mind their business".

In a Working System of Government; Buhari & Sanwo Olu would have resigned & arrested on Sight. But This is Nigeria ! #EndSARS #LekkiMassaccre

Former Nigerian Presidential aspirant, Adamu who sued Twitter CEO, Jack Dorsey, last month for supporting the #EndSARS protest, on Wednesday said via his Twitter handle that he would not sue CNN Africa for their report on the protest since the organization were only doing their job which was “investigative and not conclusive”.

Twitter users called out the tech-inclined politician for what many have thought would have been an unreasonable move if carried out.

Are you part of the authorities? Why tell us to wait for response from them? Mr Adamu, are you the one talking or lucrative government contracts talking through you?

That guy is employed to lie. A professional liar at that. The need to prove his salary this time.

Lai Mohammed cant fine CNN. It must be so hurtful.

Lai Mohammed and NBC crew on there way to sanction CNN pic.twitter.com/5w3OXxmXub

Lai Mohammed thinking of how he’ll convince NBC to shut down and ban CNN pic.twitter.com/GzL7mPqvpQ

Many Nigerian youths have continued to question the stance of the National Association of Nigerian Students (NANS) amidst the prolonged strike between the Federal government and the Academic Staff Union of Universities (ASUU).

ASUU and FG still negotiating. Students will always be at the receiving end after all this.

Age limit will still be placed on employment after successfully destabilizing the academic calendar of institutions.

What's NANS doing about this? Nothing.

In this whole ASUU and FG thing, I'm concerned about NANS. See how vocal they were campaigning for Buhari that year and how silent they are now on the strike issue.

NANS is, has and will always be a very very useless student body by all standards! Correct me if I'm wrong. ?

The discovery of a camcorder at the Lekki toll gate by the former governor of Lagos State and Minister of Works and Housing, Babatunde Raji Fashola during an empathy visit and inspection tour to the shooting scene, was a subject of ridicle once again on Twitter.

What Happened to Fashola’s Camera ?

So what footage was on that camcorder that Fashola found?

We killed the #Agent @tundefashola camcorder plan before arrival. If not, the propaganda would have been massive. Next, please!

They refused to show it to the public, they are gradually letting the case die down. CNN gave them serious of high blood pressure since yesterday, let's see if they will brand CNN report as fake. As they did to other reports after the shootings

‘2021 will not be palatable, Nigerians will not enjoy this govt’ —Primate Ayodele