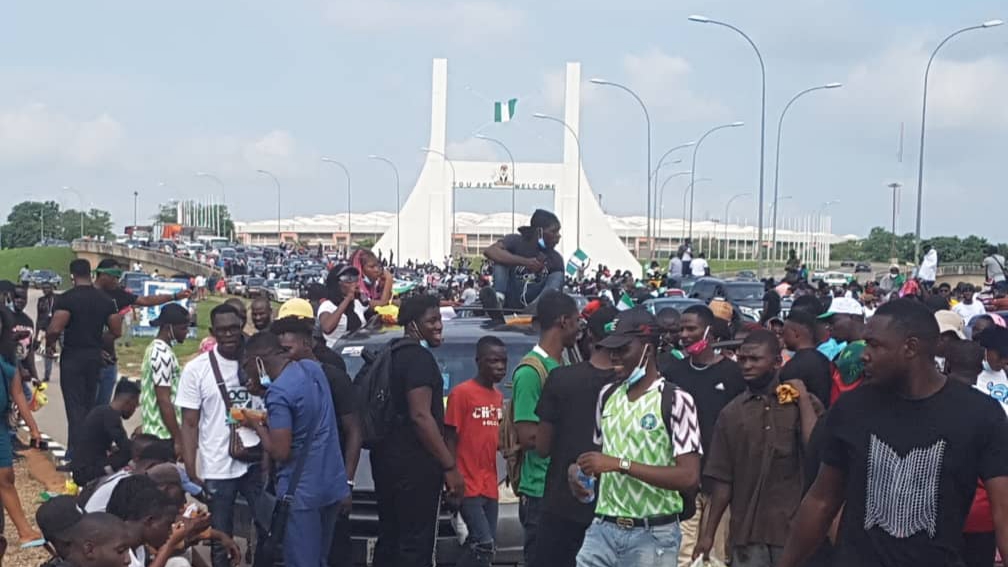 The social media space in Nigeria has continued to care mostly about the #EndSARS protest that is going on across major cities in the country, with the conversations seeming unending.

Multiple hashtags have continued to emerge on Twitter, as the struggle is showing no sign of slowing down, especially after receiving international recognition and support.

On Friday, the support from Twitter co-founder and CEO, Jack Dorsey, went a step further as the American verified more frontliners of the #EndSARS movement, including Aisha Yesufu, Bolatito Oduala also known as Rinu.

Recall that a group known as Feminist Coalition, FK Abudu and a few others had on Wednesday seen their handles verified by the social app, following Mr. Dorsey’s endorsement of the protests.

#EndPoliceBrutality, #ReformtheNigerianPolice, #LazyNigerianYouthSpeaks, #LazyNigerianYouthUnite, #EndInsecurityNow, #BadGovernmentInNigeria, #RestructureNigeriaNow, #Sorosokenodeydisguise, are all discussion trends affiliated to the struggle, which all made it to the trends table on Friday. Here are a few trends that however, caught our attention:

This original hashtag for the agitations to end police brutality and scrap the defunct Special Anti-Robbery Squad (SARS) of the Nigeria Police, came alive in style on Friday morning, as Twitter assigned a special emoji to it.

The emoji, a tight fist representing the #EndSARS movement, is in the Nigerian national colours (green and white), and it was first tweeted by Mr. Dorsey.

This happened after Twitter returned from a temporary outage, causing the hashtag to trend alongside #TwitterDown.

Twitter had, between the late hours of Thursday and the early hours of Friday, experienced an outage, for which users were unable to tweet across the globe.

Apparently Twitter was down so they could add the Nigerian flag in the form of a fist beside the #EndSARS hashtag. Please where is that Adamu garba ? he should come and threaten Jack again so they can add something else.#EndPoliceBrutality #TwitterDown pic.twitter.com/sFkcGi7Njc

We enrolled Twitter CEO @jack to our school of savages, and he is doing well!

Adamu Garba threatened to carry him to court

This is what I call… "I'm on my platform, come and beat me!"#JosEndSarsProtest #TwitterDown #EndsSARS #EndPoliceBrutality pic.twitter.com/ajtRCFeezD

#EndsSARS #EndSWAT #EndPoliceBrutality …
Enough is enough…our voice must be heard just as a mother heard the cry of her children… #ReformTheNigeriaPolice #ReconstructNigeria pic.twitter.com/XbMknuvHY5

American singer, Beyonce, trended with over 200 thousand tweets on Friday, right after Nigerian music artist, Tiwa Savage, called her out for her silence since the the #EndSARS protests began in Nigeria.

The R&B and pop singer received the much attention especially since she was almost dubbed “Mama Africa” for featuring a number of African artists in her most-recent album. Few tweeps, however, considered the backlash on the singer unnecessary.

Dear @Beyonce
When you released Lion King, many Nigerians saw it a moment of unity for all black people. A true “Wakanda” moment.

Our people are being killed by police.
Take a moment @Beyonce.
Lend a voice for the millions of Nigerians who love you.

Beyoncé used Africa to sell her music? Must be ment that’s worrying all of you. Lion king has to be one of Beyoncé’s poorest album when it comes to sales but these silly influencers won’t know! Don’t concentrate on your fight. Be looking for who to drag. Rubbish! #EndSARS

Ardova PLC, formerly Forte Oil Plc, made it to the Twitter trends table after a user identified as Irose Gold Obiagheli Adanma, accused the company of refusing to sell fuel to #EndSARS protesters at their branch in Abuja.

Protesters who engaged the tweet expressed their disappointment over what thet perceived as alignment between the government and Forte PLC to frustrate their efforts.

Noted. No more @ForteOil_NG products are to be patronized, going forward. They're an enemy of the people for refusing to sell petroleum products to #EndSARS protesters.

It used to be, not anymore.#EndSARS#CancelForteOil

Ladies and gentlemen, we boycott them. They should only sell to Buhari. Good riddance #EndSARS

He refused to sell fuel to Abuja protesters.

Remember that name.
Incase it comes up in politics or govt appointment anytime later in future.

And you also know which petrol station NOT to buy fuel from again. Thank you. #EndSARS

#EndSARS protesters in Jos, Plataeu State, have joined other states nationwide in the fight against police brutality.

As was obtainable in states like Abuja and Lagos, protesters in Jos have been repelled by security operatives with guns and tear gas. The struggle continued regardless.

We came out for a peaceful march in Jos, but we were beaten, tear gassed and shot with live bullets thankfully no lives lost.
TOMORROW WE MOVE AGAIN!!! #JosProtest #EndSWAT pic.twitter.com/wYHpqAyhOw