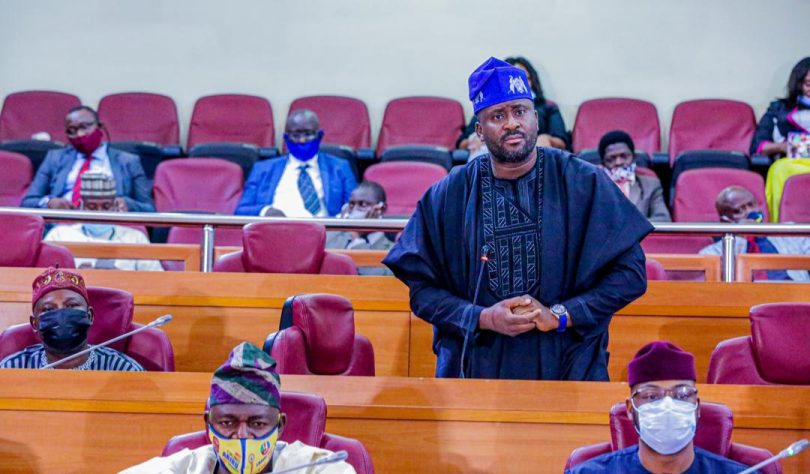 Despite the pause on #EndSARS protests following state-imposed curfews, the call for an end to police brutality, injustice and bad governance in Nigeria, has continued to trend on social media.

The question of who ordered the shooting at the Lekki Toll gate on October 20, is also yet to be brushed under the carpet as at Monday.

The following trends on Twitter made the major buzz for us:

Twitter users have mocked the former governor of Lagos State and Minister of works and housing, Babatunde Raji Fashola over his ‘discovery’ of a secret camera at the Lekki toll gate on Sunday.

Nigerians have questioned the possibility of a single camcorder surviving an already cleaned-up toll gate following the sporadic shootings by men in military uniform which brought an over 10-day peaceful demonstration in the location to an end.

The Fashola thing is the most stupid thing I have seen this year.

The Lagos State House of Assembly is developing a bill to regulate and control speech on social media. Desmond Elliot is said to be one of those pushing this.

So the plan is to deny the Lekki Massacre and then start arresting anyone who tweets about it?

What is wrong with us?

Once the bill is passed, they will deny the Lekki Massacre & arrest anyone who tweets about it’

Can’t believe this is happening in 2020

"The narrative must change, we must address the Nigerian youth, social media influencers and celebrities. We also have to decentralize the centre to allow the State function, This is the time."- @DesmondElliot_ @followlasg @mudashiru_obasa pic.twitter.com/WK1KLw1fgs

Desmond Elliot is a proof that a young person could be the President of this country and still fail us.

Reports had it that the Academic Staff Union of Universities (ASUU) was to hold a meeting with representatives of the Federal Government from 3:00p.m on Monday.

Twitter users, especially undergraduate students, then kicked off discussions about the possible outcome of the meeting, as public Universities across the nation had remained closed since Lecturers embarked on strike about seven months ago.

ASUU started their meeting with FG a while ago. What's your prediction guys?

If you don't want ASUU to call off the strike, please drop out. All of us no fit use school make am

If ASUU like they should not call off the strike, I don open shop with palliative indomie and spaghetti. I cannot let my life waste

ASUU is in a meeting withFG about calling off the strike when majority of the students have moved on with their lives, even Obinna has gone to open shop 😭😂

Rumors of Paul Pogba’s alleged retirement from the French National team flooded social platforms on Monday morning, throwing a lot of Twitter users into a frenzy.

The Manchester United midfielder was said to have dumped his national team over an alleged Islamophobic remarks by French president, Emmanuel Macron.

The president had made the said comment at an honorary decoration of a school teacher who was beheaded by Islamic extremists for blasphemy.

But Pogba has since taken to his Instagram page to debunk the rumor, tagging it as “fake news”.

Popular American news magazine, 60 Minutes, trended in Nigeria after reports from their Twitter handle confirmed that President Donald Trump walked out on an interview with host, Lesley Stahl on claims that he was unhappy with her “tough questions”.

Stahl had asked President Trump for his health care plan before he stormed out.

I can’t watch him. He lies and deflects. Never have seen a conversation with him that is remotely intelligent. Always cutting people off,always defensive, always confrontational and always dishonest no matter what the topic or question is.

The Propaganda Secretary has been a “fine” addition to Trump’s Swamp. Her willingness to lie and deceive on Trump’s behalf is disturbing! She handed over that book knowing full well it contained nothing to do with a HEALTH CARE PLAN. The blatant lying is so pathological.

WHO ORDERED THE SHOOTING, #endinjustice

Using the phrase and hashtag, Twitter users reminded the Nigerian government once again that their demands for justice and accountability with regards to the shooting incident in Lekki toll gate, were still very much valid.

WHO ORDERED THE SHOOTING ?

1. WHO DEPLOYED THE SOLDIERS?

2. WHO ORDERED THE SHOOTING?

3. WHO ORDERED THE REMOVAL OF CCTV CAMERAS?

4. WHO GAVE INSTRUCTIONS TO SWITCH OFF THE TOLL GATE LIGHTS?

5. WHO GAVE THE ORDER TO SWITCH OFF THE STREET LIGHTS?

when are we hitting the street back cos those innocent souls that died didn't die for nothing until justice prevail..no much talk we gats hit the street…

The @NigeriaGov always find ways to exonerate and divert the main attention from them. They loot public funds and they use the media to cover it up, we find food they hoard from us, they call us thugs and looters…You made the monsters we have become and it’s mutating #EndSARS

That last word though “we die singing the national anthem’’😭😭

One Twitter user, ‘ADA-OMA’ shared a video narrating her ordeal in the hands of a Nigerian Army officer who threatened to beat her up after she insisted he joined a queue at an ATM stand in Lagos.

The army officer, identified as Omoh. F was seen taking off his military belt in an attempt to unleash mayhem on the lady, but was stopped by bystanders.

Jst bcos we r against police brutality doesn't mean we can't respect dem any more…madam u cld av just allowed dat man 2 use the atm. Nt just bcos ur scared but just 2 avoid issues like this.i can hear pple telling u to calm dwn. U did this jst bcos u knw pple will tk ur side.

Your ignorance is blinking. Many of you need to step out of Nigeria to understand your basic human rights.

He wasn't fast enough watch the video again his name is Omoh F.

Nigerians congratulated Rinu Oduala and Majekodunmi Temitope, who were frontliners of the #EndSARS protests, for making it to the list of Representatives nominated for the Lagos judicial panel instituted by the Government to address the demands of the #EndSARS Protesters.

Tweeps also had some words of advice for the duo.

I ask Nigerian @SavvyRinu why young people like her are protesting to #EndSars, and what they're facing out on the streets. pic.twitter.com/oecWdNsCRn

Zero mago-mago! We also have people that will make sure proceedings must always be broadcast live for everyone to watch!

Rightly deserved …..make sure u speak for the voiceless✊✊✊