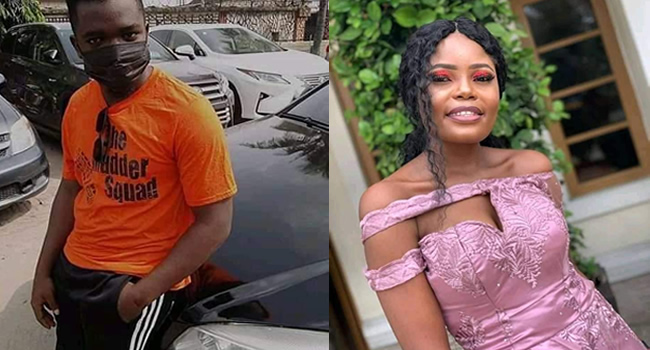 Angry reactions have trailed the tragic death of one Iniobong Umoren, who was reportedly raped and murdered by her abductor while she went job hunting in Uyo, Akwa-Ibom state.

According to reports, the deceased, a fresh graduate of the University of Uyo, was allegedly raped, murdered and buried in a shallow grave by her suspected abductor, Uduak Frank Akpan who lured her with a faux job offering.

Ini was alleged to have, on Thursday, April 29, 2021, gone for a job interview at an undisclosed location around Airport road, in the outskirts of Uyo after making a Twitter post stating that she was in dire need of a job.

Later that day, she reportedly made a distress call to her friend, where Ini could be heard screaming loudly before her phone went off abruptly and remained switched off.

Soon after, the internet went viral with her story as concerned Nigerians began to trend the #FindHinnyHumoren hashtag. Some in an attempt to unravel the criminal took to sharing evidences, locations and contacts leading to the suspect.

It was gathered that Akpan, the suspected abductor had taken Umoren to his house where a fight ensued between them. In the process, he used an object to strike her in the head, which resulted in her death.

He was alleged to have hurriedly buried her in a shallow grave and ran to Oron. Thereafter, he ran to Uruan following the pressure being mounted by Nigerians on social media.

The chairman of Uruan Local Government Area was said to have met the suspect’s cousin and requested that the suspect be brought to him.The suspect reportedly confessed to the Chairman who handed him over to the police for investigation and prosecution.

See reactions to the devastating story below:

I wish Ini Umoren can get justice today 💔 you spend 4years in school, finish and then get killed looking for a job 💔

Hiny’s elder sister said she had to stop school so that Hiny can go.
The pains. She wept bitterly!! Felt her pains. They killed her. #JusticeForHinyUmoren

This is the face of a kidnapper,rapist and ritualist.See how healthy he looks from the proceeds of crime. May his saliva become bitter in his mouth. May the remaining part of his life be full of sorrow, anguish and gnashing of teeth. Him and his accomplices #JusticeForHinyUmoren pic.twitter.com/v9PsZpjWYA

I'm broken, I'm sad, I'm tired because there are many #IniubongUmoren that are not reported, that we don't know about. This is how bad it is.

Over the past two days, I saw how Iniubong Umoren united Nigerians in a way that was admirable, yet, tragic. This is heart-rending.

@PoliceNG what's going on, why have you guys not addressed this family till now. What is your be hidden, why are things done without their knowledge? Where is the corpse of the young lady fgs#JusticeForHinyUmoren pic.twitter.com/iM3eMk12eO

The AKS Police confirmed that Iniobong Umoren's buried body has been exhumed and deposited at the morgue for autopsy, while the k*ller, Uduak, confessed to sexually assaulting her.#FindHinnyHumoren pic.twitter.com/T3vQiwb5BA

INEC warns future elections under threat after attacks on facilities