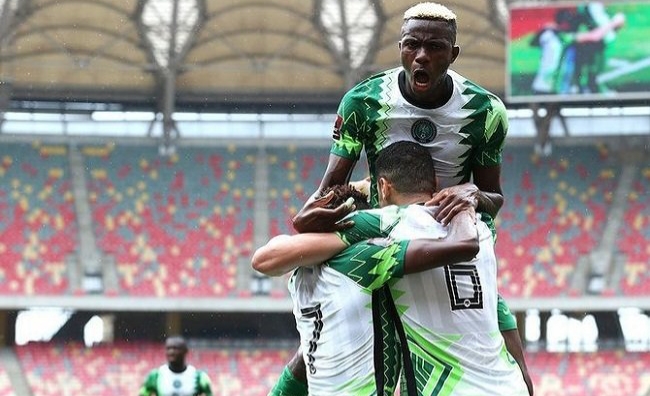 Nigerians have been celebrating the senior men’s football team, the super Eagles, over their victory against the Falcons and True Parrots of São Tomé and Príncipe.

The Eagles secured a record 10-0 victory over the central Africans in Morocco on Monday in a 2023 Africa Cup of Nations (AFCON) qualifier.

The Super Eagles had earlier bagged all three points available in the opening game of the qualifying series with a 2-1 defeat of Sierra Leone at the MKO Abiola Stadium, Abuja last Thursday.

The 10-0 demolition over Sao Tome and Principe ensures Nigeria now lead Group A with six points from two matches.

The huge score gap is already a National record for the team, and Nigerians have taken to social media to celebrate the feat.

Read Also: SocialMediaTrends: ‘Kingmaker who has become king’ – how Nigerians are reacting to Tinubu’s APC victory

See how Nigerians are reacting to the win:

When last did the Super Eagles win an away game 8-0?

And you're telling me this Super Eagles will not beat Man utd #SoarSuperEagles pic.twitter.com/o4sYsaMFNA

Osimhen gets his Hatrick for the Super Eagles of Nigeria to make it 8-0 👏🏾👏🏾.

At this point, Rashidi Yekini’s 37goals record will soon be a thing of the past.

What a striker we have in Victor Osimhen, a proper football machine 🔥🔥🔥.#AFCON2023Q pic.twitter.com/qTfFUDwWXU

Victor Osimhen scores his 12th goal for the Super Eagles of Nigeria 🇳🇬 in 22 games. He now has the second best goal to game ratio in Nigerian Football History (0.54), behind only Rashidi Yekini (0.63).

If there’s anybody that would break Yekini’s goal record, it’s Osimhen. 👑 pic.twitter.com/zDJRJRFk84

Make them organise one charity friendly match between this super eagles and Manchester united.
I wan see something pic.twitter.com/KkLTV4mEsl

Sao tome Before and After the match with super eagles pic.twitter.com/e41bDYOokQ

81 minutes, Sao Tome are yet to get a shot on target. Super Eagles have converted eight of their 14. A completely one-sided game. #STPNGA pic.twitter.com/eVMtERRA7J

Nigeria scored 10 goals in my generation.. Thank God I'm alive to see this.

If your country don win 10:0 before, hands up Nigerians: #SoarSuperEagles The Super Eagles #SaoTomeAndPrincipe pic.twitter.com/1UyKf3Ydmt

Super Eagles saw Sao Tome and Principe and assumed they were two separate countries so we gave them 5 each. #Fairshare #Equality #STPNGA #SoarSuperEagles #Afcon2023 #AFCON pic.twitter.com/nhLk2pkRnW

Ordinary republic of Paloma and Diego wan kill dem the other day.

The Super Eagles beating Sao Tome and Principe 10:0 is their best scoreline in living memory. Reminds me of Nigeria vs Tahiti 6:1 that year 😆

Special congratulations to Victor Osimhen for scoring his first 4 goals in a single game for Super Eagles. Many more will come for him.

ASUU threatens to punish universities that pull out of strike