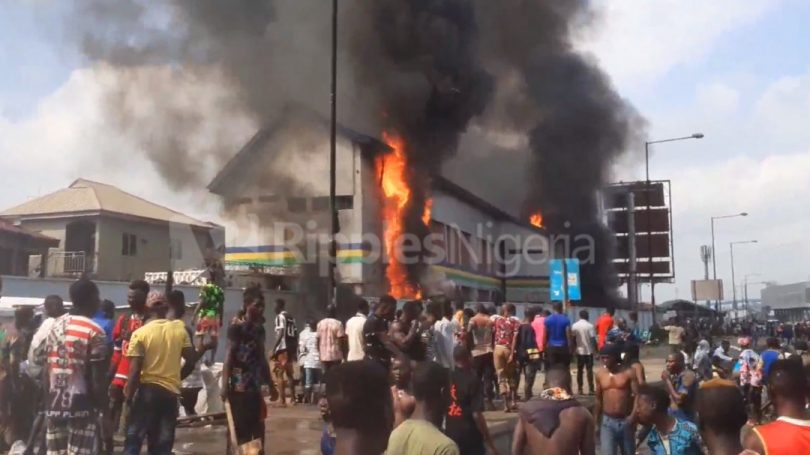 As the #EndSARS protest across the country got to its climax on Tuesday, Twitter users engaged in conversations using more phrases than hashtags, with several unfortunate incidences occurring.

A few hashtags like #EndBadGovernanceinNigeria, #EndSARSImmediately and #EndPoliceBrutalityinNigeriaNow kept the conversations and engagements going. These and more were trends that got the most attention:

This nickname of former governor of Lagos State and chieftain of the All Progressive Congress (APC), Asiwaju Bola Ahmed Tinubu, began to trend on Twitter early Tuesday after he released a statement appealing to #EndSARS protesters nationwide to end their demonstrations.

While validating the genuine reasons for their agitation, Tinubu called on the protesters to give the government a chance to implement their demands by calling off the protests.

Most #EndSARS protesters however disregarded the former governor’s appeal, as they have gone on to call on the government to take immediate actions.

24. Finally, I also strongly appeal to the protesters – YOU HAVE MADE YOUR POINT. GOVERNMENT HAS MADE ITS COMMITMENT TO YOU. PLEASE, PLEASE AND PLEASE, CALL OFF THE PROTESTS. GIVE GOVERNMENT A CHANCE TO IMPLEMENT YOUR DEMANDS. GOD BLESS YOU. @jidesanwoolu @ekometa @tunderahmanu

For those that don't like stress here is the summary of the thread….

"Leave my till gate for me, E dakun"

Stop deceiving urselfs by thinking u are punishing TINUBU by blocking the Toll gates…if u like block it for 600yrs…insurance will pay for every kobo lost in that place daily…u are only causing more arms to the staffs, ur fellow citizens passing through there daily nii

These so called leaders are talking asif we are the one's prolonging the protest….Sirs and Mas do what we want so we can end the protests, it's that simple.#EndSarsProtests #Jagaban

Tinubu has been denied profit from Lekki Toll Gate from close to 2 weeks that is why he's playing the card that richmen also cry.This isn't a democracy, it's an Oligarchy. This man is a symbol of the ills of it. Tinubu is the Oga of them all of a corrupt Government. #EndSARS

Ordinary Lekki Toll gate that we block, Tinubu want to kill us with thread 😭😭😭….. if we con shut Lagos down nko 😹😹

Nigeria’s United Nations (UN) Ambassador for Peace and Social Justice, Hussain Coomassie, who was bashed three days ago for his anti-#EndSARS comments, hit Twitter’s trends table again on Tuesday after Nigerian youths began signing a petition to strip him of his UN ambassadorial title.

Coomassie had on the 17th of October called on President Muhammadu Buhari to adopt the use of force on #EndSARS protesters.

“There are certain things that should be handled with iron fist” he said “If the police fails to do what they’re supposed to do (on the protesters), bring the military. If the military fails, we the patriotic citizens will go against the miscreants, we’ll face them,” he said in a video.

Following the bashings that trailed his comments, the ambassador tendered an apology to the protesters for speaking ill of their cause.

ALL THESE THINGS ARE MISSING . TAKE A POLITICIANS WORD FOR IT AT YOUR OWN RISK

It was anything but a peaceful morning at the Orile Iganmu axis of Lagos State after a police station was set ablaze in the early hours of the day.

The fire, said to have broken out only a few hours before the scheduled time for protests, was allegedly the handiwork of hoodlums in the area as #EndSARS protesters denied responsibility for the attack.

Although the cause of the fire is still being investigated, it was however gathered that a trigger happy police officer had fired at a group of ‘protesters’ for allegedly attempting to create a roadblock in front of the police station. The open fire, which reportedly left three dead, was said to be the origin of the pandemonium.

Following the news of this and other chaotic incidences in the state, the Governor of Lagos State, Babajide Sanwo-Olu, imposed a 24-hour curfew in Lagos from 4:00p.m Tuesday.

Thugs have set a Police Station in Orile Iganmu on fire moments ago in Lagos State. pic.twitter.com/MUU1OXTaiN

There was no Protest at Orile Iganmu, Lagos State
No #EndSars protester on sight

Thugs just went there and burnt the Police Station

Another footage of what is happening at Orile Iganmu Police station pic.twitter.com/TDp6U4hIBY

I, therefore, hereby impose a 24-hour curfew on all parts of the State as from 4pm today, 20th October,2020. Nobody, except essential service providers and first responders must be found on the streets.

So quick to impose curfew in Lagos yet so slow to stop police brutality and bring those criminals to justice. #EndSARS

The government’s response is a 24hr curfew in Lagos.

To be honest, this move by LASG had become necessary as these protests has become violent and taken over by hoodlums and street urchins, the road blocks has made it easy for them to operate as everybody is on stand still. Imo, it's time to strategize on the way forward.

Tension grew along Ahmadu Bello Way and Terminus in Jos, Plataeu State, as hoodlums and thugs allegedly orchestrated chaos in the location in midday on Tuesday.

Footages and video clips from the scene showed protesters barricading the highway into the city, with sporadic shootings, burning of cars and general unrest ongoing in the area.

Tension Along Ahmadu Bello way jos , Shops are closed and people are forced to go indoors , is this What we are fighting for ?#SecureNorthernNigeria #SecureNorth #EndSARS #EndInsecurityInNigeria pic.twitter.com/EniimRljy7

Away from the #EndSARS protests, the above hashtag trended Tuesday as part of efforts to raise awareness about the modern day slavery and child labour ongoing in the Cobalt mines of the Democratic Republic of Congo.

Congo, which happens to the world’s largest producer of Cobalt (essential for the manufacturing of phones and other devices), has benefitted far less as manufacturers than the buyers. The country still battles under-developement despite its rich mineral deposits.

Tweeps have siezed the opportunity to lament the state of the country and Africa as a whole.

Bad leadership everywhere in Africa,we are battling with police brutality in Nigeria and we all stood up for this.until the citizens of Congo Republic stands up too to take responsibility,I fear it might continue that way.

The black man is his own enemy

In the 21st century,why is there no advanced way to mine these minerals. Don't know if this wickedness or negligence. Those driving this are
Using children to push modern day slavery.
This is harsh on all grounds.
African aren't blessed to be slaves.
#NoCongoNoPhone

The name of Ex-Presidential candidate, Adamu Garba, and that of the founder and CEO of Twitter, Jack Dorsey, hit Twitter’s trend table yet again on Tuesday.

Taking his brawl with Mr. Dorsey a step further, Garba in a statement to newsmen declared that he was filing a suit for $1 billion against Dorsey for “damages and actively sponsoring and supporting the #EndSARS movement by encouraging funding”.

He also took to his Twitter handle to display copies of the legal documents filed against Dorsey. But Twitter users have since questioned the rationale behind the move.

My oga, don’t be offended, you’re outdated, we are the future,crypto or not we need to change this country, you old babariga folks don’t even have ideas to make this nation great, all you guys do is to sit and allow paper control you guys. Sorry oh,

This Garba Adamu guy just want to trend by all means..
WELL..thank you for using your voice to confirm to the world that there's actually police brutality in Nigeria✊✊ and the Gov't is not doing anything…
we will pick what we need and delete the rest…#EndSARS Lagos jack

A quick reminder that Adamu Garba was once a Presidential aspirant.

I am ashamed of the lawyers that instituted that action on behalf of Adamu Garba.

How come you are so loud about Jack’s support but quiet about the killings of peaceful protesters? North banditry? Unemployment in Nigeria? Inflation in Nigeria? Exchange rate influx?

Why are you quiet about the things that actually matter? I wonder why