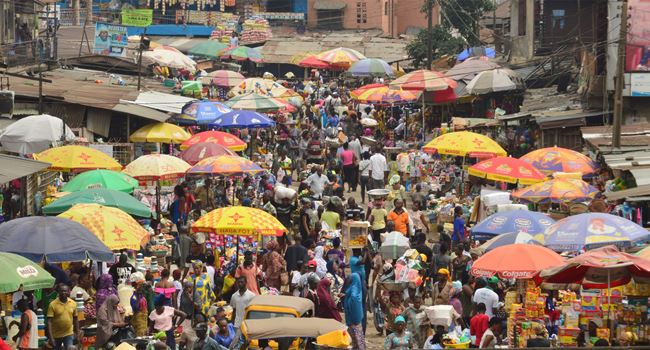 A video has been making the trend on social media over the alleged imposition of campaign donations on Lagos market women.

According to the video seen by Ripples Nigeria, a man was lamenting to a fellow about the imposition of campaign donation by the Iyaloja General of Nigeria, Folasade Tinubu-Ojo.

The donation is alleged to be a support for the presidential ambition of Folasade’s father, Asiwaju Bola Ahmed Tinubu, who is running under the ruling All Progressive Congress (APC).

This is how Tinubu and his agents force market women to donate to his campaign and come out for rallies..

We must end this kind of politics, and it is only by voting them out. His daughter is the Iyaloja. pic.twitter.com/9ps2RT6tFx

Iyaloja can force them to lock their shops or face a penalty. But she can’t force them to thumb print for a failed party.
We never start and Una don dey run kiti kiti, no worry your daddy will soon drop another video😂

When your daughter is the “Iyaloja” of all the markets in Lagos, how dare you not wear pink asoebi and join people in marching for a man that can’t even march.

This tyranny needs to be stopped mehn.

Update:
These women were forced to do this, they were threatened to have thier shops locked up if dey didn't do this.
At Iyaloja's command o.

For how long will dis continue?

I know that many amongst them would still vote for ObiDatti.

Lmao! And it’s pretty easy to actually force the market women to walk. Remind me who the iyaloja is again?😊😊

You are forcing people to go for a march,then you shamelessly post pictures of how he has a large support base. No be juju be that? Shameless people defending a fraud. Well,na only Lagos una fit do that sha,make una iyaloja go Ibadan or Osun go close their shop naa.🙃🤪 pic.twitter.com/Dm4Dv6itCc

Tinubu's daughter is the Iyaloja of Lagos, the market women have no choice but to join their rally, lest they lose their shops.

Nigerians have taken to social media to seek justice for a Twitter user @ObiFlagboy who was brutalized at Oshodi.

Ripples Nigeria learnt that ‘ObiFlagboy’ who played a major role during the 2020 End SARS riots changed his username from End SARS Flag Boy to ‘ObiFlagboy’.

He was known to be active during the protests by waving Nigerian and End SARS flags from various positions like bridges, tall buildings, and the top of trucks.

Many have alleged that the brutality was done by Tinubu’s supporters.

As I explained earlier on phone, please get your people to make a formal complaint at the nearest police station. I have equally alerted the DPOs in the jurisdiction as to your coming. I am on standby for further service as the need arises. https://t.co/OtN2E4WFKx

One chairman of Oshodi park allegedly tried to burn two supporters of Peter Obi to death yesterday for carrying the Labour Party flag.

They were beaten to an inch of their life and one of them is still coughing up blood.

Is this the democracy we practice now?

I am saddened by what happened at oshodi. We must not take this with levity.We must hit the streets if we have to!
An attack on one Obidient is an attack on all!
Jagaban's people are already giving us pre-amble to how the elections will be .They may not allow Obidients vote!

Good people went out there to campaign for who they believed in. A bunch of cowards decided to mob them and almost set them ablaze.

If not for the intervention, we would have heard “two boys went to steal at oshodi and the angry mob killed them”

You messed with the wrong one.

. @officialABAT has never Condemned any of the attacks and Brutalization of Obidients by his supporters in Lagos state.@ObiFlagboy(an Obidient) who was brutally beaten by Oshodi chairman and his boys is currently struggling for his life in the hospital as we speak.

@ObiFlagboy narrating the brutality he suffered at the hands of thugs along with a number of park officials in Oshodi. We call on the @PoliceNG to investigate this issue and bring the perpetrators to book. Freedom of Association is a right owed to every Nigerian. pic.twitter.com/ADDPwnoeEq

No words from supporters of Bobo Chicago on the assault by their people on Flagboi yesterday at Oshodi, just for having a different political leaning.

They don’t deem it aggressive or a demarketing to their principal.

If anything, you can literally taste their joy it happened.

How can someone go to Oshodi to fly the flag LP? How! What level of vulnerability is he putting himself into. Guys, there’s still life after 2023 general elections.

H.E @PeterObi, there is a video of @ObiFlagboy going viral. He was beaten by the Chairman of Oshodi.
Sir, i think you need to address this issue of intimidation and harassment of your supporters within lagos. There is a place in Sabo yaba, lagos state. They won’t allow any