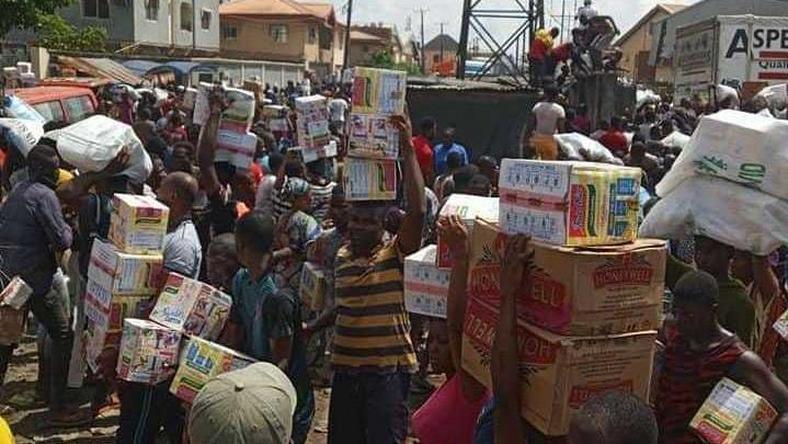 The streets of social media on Thursday remained busy in spite of the curfews imposed by several state governments in Nigeria, as #EndSARS protesters have refused to back down on their demands.

The engagements on Twitter have remained high especially on conversations bothering on the President’s prolonged silence since the Lekki shooting incidence and other relevant socio-political issues.

Trends like #BuhariIsDead, #EndBuhari, #NIGERIAPREVAILS and #ProtectLagos were among the few hastags on the trends list on Thursday. The following trends also made top spots, thereby catching our attention:

Twitter users mourned the loss of one Okechukwu Obi-Enadhuze who died during the Lagos unrest that took place on Wednesday, October 21.

Oke as he was fondly called, had made a random tweet about Nigeria not ‘ending’ him less than three hours before the pathetic incident happened.

He was said to have been stabbed in the neck by hoodlums who invaded and looted his family apartment at the Mafoluku, Oshodi area of Lagos.

The deceased who was reportedly a fresh graduate of Computer Science from the Federal University of Agriculture, Akure was a skilled product designer. Tweeps lamented how the country indeed ‘ended’ him.

I can't believe he made this post and less than 3 hours, he's dead.. Nigeria did end him ??? RIP soldier

Good day, My name is Obi-Enadhuze Daniel younger brother of the now deceased Okechukwu Obi-Enadhuze @O_Okee . I, my brother and mother lived at makinde police barracks, mafoluku, Oshodi, Lagos State. Today at about 11 o'clock in the morning… https://t.co/CSmvFitFBe

May his soul rest in perfect peace

RIP OKE … they must pay

The word got to the top of the trends table on Twitter around midday on Thursday. This was following the remarks made by Defence spokesman, Major General John Eneche on love television, that the videos of shootings that took place at Lekki toll gate on Tuesday night, were photoshopped.

Nigerian Major General said live videos were photoshopped, Something that was showing live on someone's Instagram page is photoshopped* RETWEET AGGRESSIVELY FOR THE WORLD TO SEE HOW SHAMELESS NIGERIAN GOVT IS ?
COVID-19 | #NIGERIAPREVAILS | #wickedness | Photoshop | Oba of Lagos pic.twitter.com/z2fDyLNq0J

There is no sense in denying or lying about something watched live by over 100,000 people. You cannot photoshop an Instagram live video that was on for over one hour. #EndSARS

Been a video editor for a while now and ICT consultant for over 15 years… didn't know you could actually photoshop LIVE videos. Wow, we learn everyday. Bros, John Eneche can you refer me to your analyst LinkedIn?

The palace of the Oba of Lagos was not spared following series of attacks on the abodes of traditional rulers since the #EndSARS protests began.

In a more extreme fashion, hoodlums on Wednesday vandalized the monarch’s palace, carting away valuables and sacred effigies.

In videos which made the rounds on Twitter, hoodlums were seen parading the monarch’s staff of office and desecrating his throne.

The incidence made most Twitter users wonder at the guts of the vandals that carried out such sacrilege.

The attack and looting at Oba of Lagos's Palace Yesterday is an evidence of how hated and disconnected Oba Akiolu is from his subject.

This pure wickedness from the oba of Lagos, so this palliatives they with you your people dey suffer

Lmao???
They're even swimming in the Oba's pool.
Who knows this day would come
☹️?

lol we just Dey kill ourselves at the end of the day na public funds them go use renovate money way dem suppose use provide school and other public neeeds. This isn’t the way forward.

I was today years old when my mum told me that the Oba of Lagos was a former policeman.

If this is indeed a revolution, the Palace may not return as before

The name of ex-presidential aspirant, Adamu Garba, made it to Twitter’s trends list for the umpteenth time this season, and this time, for a reason quite different from his fight against Twitter CEO, Jack Dorsey.

Adamu was called out for allegedly inciting ethnic and tribal division with a three minutes video.

In the video, Garba, addressing the #EndSARS protests, affiliated it with the Indigenous People of Biafra (IPOB) movement, as he called on both Muslim and Christian Northerners to unite and restore the “dignity of the north”. “Let nothing come between us,” he said in Hausa.

Tweeps and #EndSARS protesters immediately took to reporting his account for ‘hateful and abusive’ comments.

Here's the literal meaning of everything he said. I think its time to go our separate ways. This man knows that most Northerners are gullible and they'll do whatever their leaders say without minding d repercussion. #endsars Adamu Garba #NIGERIAPREVAIL #Buhariisdead Nnadi kanu pic.twitter.com/UkJDo0lts5

Make No mistake, Adamu Garba is that Percentage of North that wants majority of the North to remain poor and uneducated so they can brainwash them during election

Adamu is not a Friend of Arewa !!

Adamu Garba has been tweeting in English all this while. Now it’s time to sow ethnic divisions and openly call for violence, and he has switched to Hausa.

This man is a bigot. And he knows what he’s doing.

The name of Governor of Lagos State, Babajide Sanwo-Olu trended alongside Arise News network after his live broadcast went viral, as he explained the incident that took place at Lekki on Tuesday night.

Still maintaining oblivion, the Governor addressed the issue of the power outage and removal of surveillance cameras hours before the shooting began. He stated once again that no life was lost during the shootout and assured residents of the state that further investigations were ongoing.

Watching him stutter live. My question is during the corona virus pandemic, there was a curfew. Did this company remove the so called laser cameras? Let us not be diplomatic in our response, we need the feed from the cameras

@jidesanwoolu please start arresting all the people/organisations/news outlets throwing out FAKE NEWS FROM PIT OF HELL ,that has caused innocent people of Lagos to lost their properties and jobs. Misleading people into violence is not democracy!!!

Only a few minutes after commiserating with the victims of the Lekki protests, the name of Nigeria’s Vice president, Yemi Osinbajo, made it to Twitter’s trend list. Nigerians called him out for his delayed response and demanded the whereabouts of the President.

Again the first person in that presidency to acknowledge our pain! You care and some of us know, we just want Justice sir pls

Mr. Yemi Osinbajo is really the "Consoler General of the federation!".

It was an interesting afternoon indeed for residents at Monkey Village, Maza-Maza Lagos as alleged hoodlums broke into a warehouse filled with food items suspected to be Covid-19 palliatives.

The food items, which including Indomie, bags of rice and garri, were reportedly meant to serve residents in the Festac-Okota axis of Lagos state during the Covid-19 lockdown last April.

The looting of the warehouse caused a stampede that reportedly left two dead.

Nigerians have called the government wicked for ‘hoarding the palliatives’ meant to be distributed to citizens at the heat of the Covid-19 pandemic.

This is when they had those palliatives stocked up. Ads were made on social media yet we got nothing. This is pure wickedness and if you defend the Nigerian government, you are worse. |CACOVID | oba of Lagos | #wickedness Bode Thomas | ikoyi | Garri | COVID-19 pic.twitter.com/4QCmC4SxMS

Covid 19 relief funds supposed to be given to the people since March, they kept it to themselves. The cartons of indomie I saw am not sure indomie company has that kind of indomie in their store. Its very bad. They keep doing us dirty. Enough is enough. #Endsars pic.twitter.com/LSyqbjbONg

People were begging for 500 naira on this tl and our leaders kept indomie inside warehouse. In a few months, everything there would have spoilt.