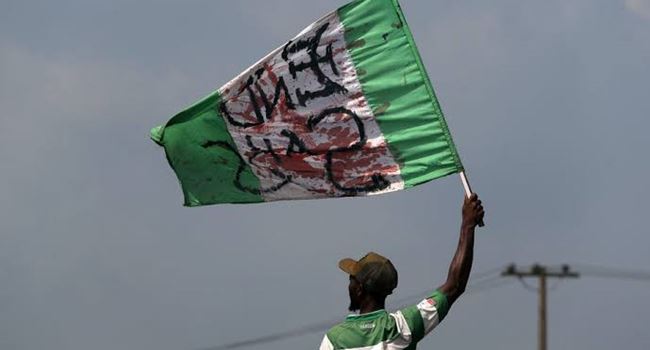 Social media reacted massively to a report by the United States government in connection with the alleged massacre of unarmed #EndSARS protesters at the Lekki Toll Gate in October 2020.

According to the report released on Tuesday, March 30, 2021 and titled ‘Country Reports on Human Rights Practices: Nigeria’, the US government stated that security operatives indeed fired shots in the air, adding that the reports of mass fatalities were not verified.

The report read: “On October 20, members of the security forces enforced a curfew by firing shots into the air to disperse protesters who had gathered at the Lekki Toll Gate in Lagos to protest abusive practices by the Nigerian Police Force’s Special Anti-Robbery Squad (SARS).

“Accurate information on fatalities resulting from the shooting was not available at year’s end. Amnesty International reported 10 persons died during the event, but the government disputed Amnesty’s report and no other organization was able to verify the claim.

“The government reported two deaths connected to the event. One body from the toll gate showed signs of blunt force trauma. A second body from another location in Lagos State had bullet wounds. The government acknowledged that soldiers armed with live ammunition were present at the Lekki Toll Gate.

“At year’s end, the Lagos State Judicial Panel of Inquiry and Restitution continued to hear testimony and investigate the shooting at Lekki Toll Gate.”

The artist, who live-streamed the purported shooting at the Lekki Toll Gate on that fateful Tuesday, claimed that at least 15 protesters were killed by soliders who fired live ammunition, adding that the bodies were carted away in military vans.

Amidst call-outs and slanderous comments against the entertainer by some Twitter users, a few other Nigerians took to their handles to lash out at those disputing her claims.

Dj Switch is just tasting what Omoyele Sowore has been consuming from Nigerians over the years. Sis, you are a patriot. Paid influencers can't change what we saw on 20/10/20.#EndSARS

For those calling DJ switch names and getting paid change to make her look bad, just know the spirit of those killed at lekki toll gate will hunt you and your family.😑

So DJ switch is now a liar ? What we see live on her page is a lie also ? People didn’t die ? Those who died are chickens ?
The fact that some people are sponsored to trend #LEKKILIES actually buttress the point that Nigeria is far from being set free

How many dead bodies were shown on DJ Switch Instagram live?

Lol… After US statement, you people paid Influencer to trash Dj switch.

I give up on this country

Fired "INTO THE AIR" AND NOT AT PROTESTERS" to enforce curfew"
Nigeria Army did affirm firing BLANKS into the air.

Your report claimed live bullets and even quoted the serial number from Libya were used.

Expected a "disclaimer" to your earlier claim of "massacre".

The bullet the army guys shot at us this pics we took them after the army guys ran out of ammo and started firing one one shot they even came closer to us and one of them said guy na order I Dey follow Abeg I fit see cigar for your hand #LEKKILIES pic.twitter.com/SiaosL2HzJ

They want to register a #massacre that never happened on our minds, we asked for evidences they give us lies and try to blackmail us emotionally.
The devastating wrecks of their original plan are still there for us to see. #LEKKILIES

Nigerian Youths are trending #LEKKILIES to discredit DJ Switch and you think we are going to get it right come 2023?

One of the biggest enemy of freedom is a happy slave. This is one ☝️ of them.