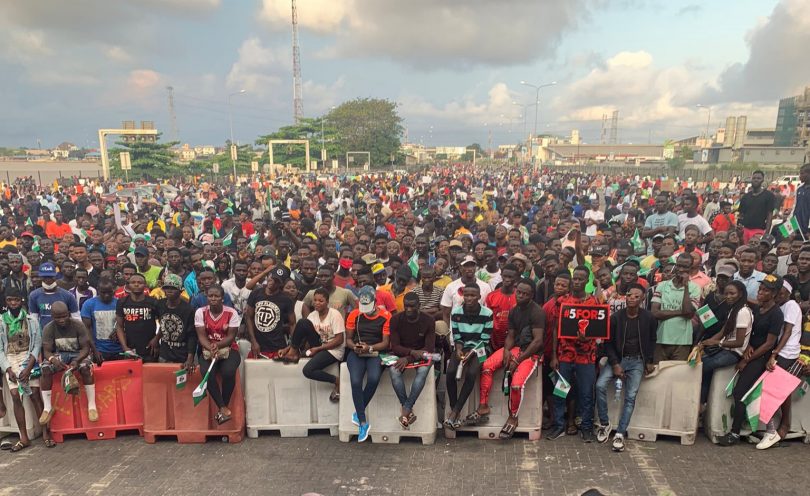 With the #EndSARS campaign seemingly loosing momentum on social media, the new interest of users has been the disturbing rate of looting and vandalism happening in various states of the country.

Mixed reactions have continued to trail the raiding of warehouses stocked with Covid-19 palliatives as four states so far, have lost relief food items stored up, to looters.

Amidst these buzzing conversations, hashtags like #ArrestKillerOfficers, #LekkiMassacre and #2023ElectionforYouth, all affiliated to the#EndSARS campaign, managed to find a spot on Twitter trends list on Saturday. Tweets addressing the Academia as well as ethinic bigotry in Nigeria also trended.

The discovery that information about the #LekkiMassacre had been published on Wikipedia’s website, threw a good number of #EndSARS protesters into excitement.

The protesters were thankful that the online encyclopedia captured important details and were rather explicit in their description of the events that took place on the night of Tuesday, October 20, despite the government’s blatant denial.

Retweet if you love what you are seeing. pic.twitter.com/1OY9PZQiDw

The acronym of the Academic Staff Union of Universities, ASUU, hit Twitters trends shortly after a statement was released on their official Twitter handle in defense of the youths and their advocacy against police brutality in the country.

Highlighting the validity of the nationwide protests embarked on by the youth, the embattled academic body, which had been on strike, proceeded to empathize with the families of those who had lost their lives in the course of the struggle.

While most tweeps were quick to call out the union for failing to address the now six-month-old strike, others have praised them for tenaciously holding on to their demands from the Federal Government.

I commend ASUU for standing against the killings in lekki..
The FG should be blamed and not ASUU

You are the only Union presently that can resist the FG, pls don't relent until your demands are meant….

I stand with u @ASUUNGR

Do you expect them to come and lecture you on an empty stomach?,if the senators can collect millions for doing nothing, why can't those people that lecture us collect enough money to cater for their needs.
Abeg channel your energy on Fg not ASUU.

whether ASUU are fighting for our rights or not all I know is they shouldn’t call of strike now, my brain is on sleep mode till 2021

The capital of Cross River state trended amid outbreak of violence and looting carried out on both public and private enterprises by hoodlums in the area.

The looters were said to have invaded a Covid-19 palliatives warehouse before proceeding to a branch of First Bank, a Tecno phone office and one Value Mart Stall owned by the wife of the former governor of the state, Liyel Imoke.

According to reports, the looting went on all night until the governor, Ben Ayade, imposed a 24-hour curfew on the city. Calabar trended with over a hundred and eight thousand tweets.

BREAKING: After emptying their COVID19 palliatives warehouse, Calabar youths in Cross River gather in front of soldiers to sing the national anthem and chant #EndSARS!!#2023ElectionforYouthpic.twitter.com/8qAXE5oauo

Everywhere in calabar is being looted.
Phone shops, banks, federal institutions… Literally everything.

Calabar is in a total mess.
Even Mad people were released from Psychiatric Hospital.#calabar pic.twitter.com/u60jGbgEQn

We in Uyo here tap into your blessing. My wheelbarrow is ready oo, God reveal to us the hidden treasure of our land mk we chop Christmas well.🤡

Old Nitel office, Bukuru was possibly the liveliest place in the whole of Jos on Saturday after a warehouse containing Covid-19 palliatives was discovered and raided by residents.

How them take climb the roof? 🤣🤣🤣Just thinking.

Chai is it so hard to share Palliatives? Why are the Gov't this wicked

Malls, Shopping complexes and private enterprises became a shadow of themselves on Friday night after hoodlums raided and vandalized properties in Ilorin metropolis.

The looters were said to have carried out the heinous act from late hours of Friday into Saturday morning.

Valuables from ShopRite, Cold Stone and Fastfoods around town were carted away by the vandals.

Although the reason for the crime is unknown, the governor of Kwara State, Abdul Rahman Abudulrazaq has imposed a 24-hour curfew following the events of Friday’s evening. Social media users have also condemned the act.

Like People Still get Nerves to go and Pack Stuffs there, like where are the Police ? #ilorinlooting
Ilorin Shoprite pic.twitter.com/KSjMJHZB62

This is really sad!!! We are our problem,how will you make someone cry, and it will not take you a month to finish. And these are people who actually live on loans, how do you they expect them to live now?Their families, children, people working for them will be rendered jobless

This fills my heart with so much joy. I hope these guys do not even have a change of clothes till they're sentenced.

Isn't there a curfew… Why are people still going to the mall to STEAL???
This breaks my heart#ilorinlooting #BaseOnWhat pic.twitter.com/eHUV413FjB

Twitter users called out one London-based Nigerian and leader of the secessionist movement, Young Yorubas for Freedom (YYF), Adeyinka Grandson for his latest statements inciting attack on Igbos.

In the video which made the rounds on Social Media, Grandson issued a 48-hour ultimatum from Friday, October 23 for Igbos to evacuate Yoruba land or face series of attacks.

He further threatened to barricade the roads leading into Yoruba states from Monday, October 26. But Twitter users have ceased the opportunity to call for unity by tweeting against all forms of ethno-religious bigotry.

Who are the 'we'? Your location says London but you're inciting a tribal war in Nigeria. We are too matured to fall for these gimmicks

Lol, who be that?

I've not even heard of that Adeyinka Grandson of a person before now. Who are the "we" that the fool was referring to in his threat video? E be like say craze full him head. Who made him a spokesperson of the Yoruba people? Oponu apọda.

Lol, agreed, and he's Adeyinka Grandson of Yoruba land and Asari Dokubo of Naija Delta. Everybody gets their own wahala son. Avoid them.