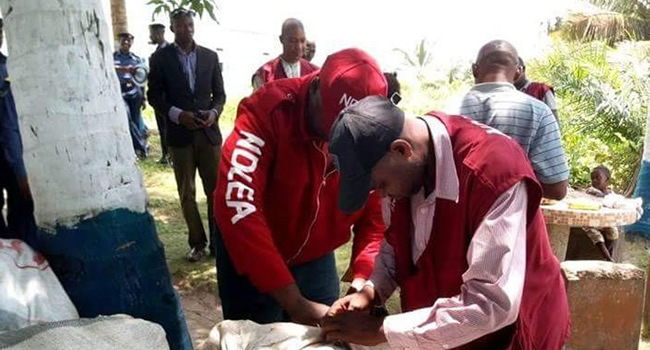 Many Nigerians have taken to social media to react to the recent destruction of 1.8 tonnes of cocaine worth N195 billion seized from a warehouse in Ikorodu area of Lagos.

Ripples Nigeria learnt that during the raid, five persons, including a Jamaican and a warehouse manager, were also arrested.

Read Also: SocialMediaTrends: Nigerians make fun of National Grid after yet another collapse

This administration must really think that we are daft sha!!
What is this lamba that the NDLEA is giving with this cocaine seizure saga? Dem dey burn evidence? 🤦🏽‍♂️

NDLEA has “burnt” the 193 Billion worth of Cocaine seized in Ilorodu . 🤣🤣🤣 pic.twitter.com/rVHiRgp44l

FLASH : The $200m worth of cocaine found in Ikorodu Lagos , has been set ablaze by the Nigerian Drug Law Enforcement Agency ( NDLEA), following a Federal High Court order. pic.twitter.com/13XpKCiLKA

Someone, somewhere, actually believes NDLEA destroyed N193bn worth of cocaine in this Tinubu's Lagos

The recent successful operations by the NDLEA has shown that over the years,Nigeria has been silently and dangerously grafted into the tunnel of international drug trafficking.The cleansing operation is commendable.

Why is @ndlea_nigeria destroying the stash discovered from its biggest ever drugs burst without prosecution?

No arrests made. No indictments raised. Only a few days in and EVIDENCE IS BEING DESTROYED.

This is very unlike NDLEA. Wats gwan, NDLEA?https://t.co/3nIeqIChhR

Been away from these streets since morning. Just read somewhere that thr Ikorodu drug bust has been destroyed by NDLEA.
How could NDLEA have burnt such vital piece of evidence? Does the burning (call it tampering) not contravene Section 123 of the Criminal Code?

– Next NDLEA 'burns' d cocaine even b4 d matter is decided in court.