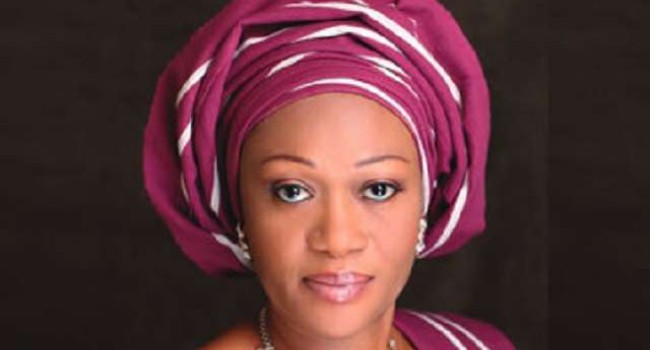 A statement by Senator Remi Tinubu concerning the issue of insecurity in Nigeria, has stirred angry reactions on the streets of social media.

Remi, who is the senator representing Lagos Central Senatorial District, made it to Twitter’s number one trending topics after she was heard tackling her colleague, Smart Adeyemi, during plenary on Tuesday.

Adeyemi was decrying the worsening insecurity challenges bedeviling the nation as the worst since the Nigerian civil war, when Tinubu lashed out.

“This is the worst instability we are facing. Infact, this is worse than the civil war,” said Adeyemi, Senator representing Kogi West amidst an outburst of emotions.

But Remi was caught saying, “Are you in PDP (People’s Democratic Party)? Are you a wolf in sheep’s clothing?”

Her utterances sparked outrage from Nigerians who accused her of playing party politics at the expense of human lives.

Many who also accused her of being desperate for political correctness due to her husband’s rumoured presidetial ambition have vowed she would never become first lady of the country.

For an aspiring first Lady like Remi Tinubu to sit in the floor of the Senate and boldly try to shout down the cry out against insecurity in a time like this because of party interest, shows it all, there's no basis for comparing her to Aisha Buhari.

May Remi Tinubu's First Lady ambition not happen to Nigeria. The country is facing an existential threat and this is how far she could see – APC / PDP.

Senator Remi Tinubu has made it clear to Nigerians that in APC, you lack the right to speak the truth to power, no matter the deterioration of us the country

Selfish interest fought cabal and lost. She relocated to Dubai quietly. Now she's only into book launching and silence. Remi Tinubu will be worst.

Dame Patience with her bad English now looks like a mother and a saint. At least she cried.

Hopefully, after Buhari is gone in 2023, & Remi Tinubu lost her bid in becoming the first lady, the RCCG will need a lot of rebranding.

Unless the premium hoodwink inside the church is stronger than Thanos. Religion has done more harm than good to millions in Nigerians. pic.twitter.com/p7CdYodNsx

I've said it before, if you remove a little fornication here and there, I'm more equipped to mount a pulpit than "Pastors" like Remi Tinubu.

Example of the prophets?
You can't support the wrong decisions taken by our leaders and then tell me to pray for solution when God has already given solution to us.

For a nation that is too religious, we are too corrupt and lack every form of human sympathy. A church leader
3/4

The ovations were loud for popular Yoruba Actress, Iyabo Ojo on social media, after she lambasted her colleague Yomi Fabiyi for sympathizing with Olanrewaju James, popularly known as Baba Ijesha, who has been arrested for allegedly molesting a minor.

Recall that the said Yoruba thespian, Baba Ijesha, was last week arrested in connection with the rape of a 14-year-old.

Popular Comedienne, Princess, had taken to her Instagram page to confirm that the vctim was her foster daughter, disclosing that Baba Ijesha, assaulted the girl first while she was seven.

He was also said to have penetrated her once with a key. The victim, she explained, did not open up on the incident until recently, which forced her to mount the CCTV that caught the actor in the act.

In response, Yomi released a post, urging his colleagues not to jump into conclusions on the issue yet, while demanding for evidences first, even though the police had released a statement confirming that the accused had confessed to the crime.

This did not go down well with Iyabo Ojo, who via a live Instagram video called out Yomi and all pedophiles and rape sympathizers.

Sticking a car key or any other object into anyone's vagina without their consent is sexual assault at least.

A 7 year old cannot give consent.

Baba Ijesha needs to face the full wrath of the law.

Yomi Fabiyi needs to be ostracised.

Thank you Princess for standing up.

I love the energy Iyabo Ojo came with for these silly nitwits. Mo Stan pa

Iyabo ojo said if they release baba ijesha, she’ll send him back😆 love to see it

What Baba Ijesha has done will become a national fight between Actresses and Actors… Bcos most of these men engage in same act.
For now, I still dey watch as drama dey unfold. I feel for princess though.

The CCTV shouldn't be released

Baba ijesha just ruined my childhood memory and love for him, He deserves whatever he gets, big ups to iyabo ojo btw ❤️❤️❤️.