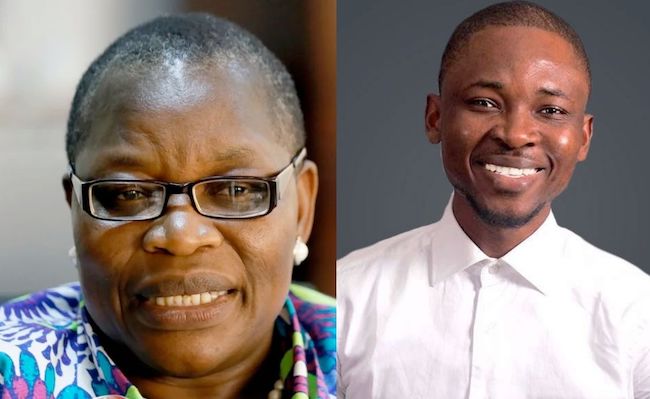 The duo made a return appearance to Twitter’s trends list on Wednesday, after Nigerian blogger, Japhet Omojuwa responded to claims he listed former Education Minister, Oby Ezekwesili as a director of his company, “Alpha Reach”, without her consent.

Ezekwesili had last week issued a legal complaint, filed on her behalf by Falana and Falana law firm, demanding full disclosure and a public apology for the blogger’s action, the same day he was embroiled in controversy with relations to Venezuelan felon, Alex Saab.

But in a recent response to Ezekwesili’s complaints, Omojuwa claimed that her consent was indeed sought before she was listed as a director of the firm, adding that they both shared a long-standing relationship before the recent fall-out due to betrayal of his loyalty.

“Our client has a 10-year relationship with your client dating back to 2011. Our client had just completed the mandatory National Youth Service when he met your client, who took him under her wings and even assisted in paying part of his rent in Abuja in 2012.” Omojuwa’s lawfirm, Babalakin and Co. wrote.

“The relationship between your client and our client deteriorated because our client is no longer the impressionable boy who had just completed his NYSC in 2011.

“He is a man who has earned his stripes and is no longer willing to fight proxy wars or be used to fight perceived enemies by a benefactor. He is tired of your client’s constant efforts to control his public views and tweets

“While he remains grateful for your client’s past contributions to his growth and development and is sad about the recent turn of events, our client is ready to use every piece of information at his disposal to defend himself and his future against your client’s ungodly allegations,” the firm added.

Pastor @obyezeks, you served me legal notice publicly, so I was left with no choice but to serve you publicly too. PS: I won’t react to the unwarranted provocation from you, your sons & allies. You betrayed my loyalty, service & respect to you, for reasons I don’t understand. xx pic.twitter.com/Hbj8Atmjn4

Omojuwa told us that Madam Oby was expectant to be made a Minister, but he failed to tell us what he was promised to have made him so vile and determined.

1. Omojuwa released this bestseller on Madam Oby. When I said Aunty Oby was used & dumped, I knew what I was saying

Oby was OK with anything, anything at all, that cud bring down Goodluck Jonathan. So I will not absolve her from complicity. She knows more than she is telling us. pic.twitter.com/CNOZ69r85a

El-rufai achieved his dream, Madam Oby lost out. Alpha Reach was created to bring down GEJ.

Thank God for Alex Saab, that guy have done a lot for Nigeria.

When Omojuwa cries of hate and toxicity, just know he started it. Just know he created it. We wait more revelations.

The agbayas that were nowhere to be found when I was being publicly denigrated – AFTER I had acknowledged her lawyer’s letter – have now found their thesaurus. I can’t even be bothered. You killed something last Friday, this is another human you are dealing with now!

If Madam Oby is serious about this issue, she knows what to do.

All these letters na banter.

Basically, Madam Oby is bitter and transferring her aggression on Omojuwa because she wasn’t and will never be appointed by the APC government.

Nigerians on social media have hailed the recently appointed Chief of Army Staff (COAS), Lt. Gen. Ibrahim Attahiru for firing back at the House of Representatives following their investigation into arms procurement by the military.

The Army Chief had upon invitation, appeared before the House of Representatives Ad Hoc Committee Investigating the procurement of arms and ammunition for the Nigerian Army and Paramilitary Agencies in the country, only to decline issuing any explanation to lawmakers on the matter, noting that the past Army Chief, Major General Tukur Buratai, should be invited to explain arms procurement made during his tenure.

He insisted that an executive summary of all documents requested by the committee had been provided, adding that he had barely settled into office and is not the right person to speak on arms procurement made by his predecessor.

“The submission before you speaks to the report before you. It is an executive summary. It is very self-explanatory to the extent that it has been pluralised. When you demanded this report, you stated a specific period for which you wanted it.

“You may wish to recall that the Chief of Army Staff took over the mantle of leadership barely two months ago.
“The period for which you want this report having been summarised in the executive summary explained whatever details you require.

“Issues of arms procurement that you so demand to know were done by specific individuals, I will rather you call these individuals to explain to you very specific issues the general explanation is contained in this report,” the COAS told the committee

Although, some Twitter users picked sides with the lawmakers in criticizing Attahiru for his rather ‘uncivil’ behaviour before the house, others were ironically impressed with the Army Chief for “puting the rubber stamp legislators in their place”.

🎥I watch this video over & over again. The COAS Lt Gen Ibrahim Attahiru, was fully prepared for the House of Reps committee members on Arms & Ammunition Purchase. An explosive session🔥 pic.twitter.com/6goLleRwMf

Today you are hailing COAS for being rigid against elected officials after missing their invitation 3 times without apology.

I will personally express my disappointment in anyone that trembles before this 9th National Assembly, either HoR or Senate.
COAS wasn’t rude or arrogant, he knew fully well the capacity of this NASS & vested on that.

This is what we get from a failed system.

How do you explain Arm purchased for security in the full glare of cameras, when same explanation was submitted in writing for their review?
Who does that?

Election many of which were fraudulently procured.

Seven years after Boko Haram militants stormed a Government Girls Secondary school, seizing 267 school girls from a remote community in Chibok, Borno State, Nigerians on social media are still agitating for the release of the over 100 more girls remaining in the den of the insurgents after some were reportedly released in 2016 and 2017.

Today marks 7years since the abduction of 276 Chibok girls…While 164 have been rescued, 112 girls remain in captivity. I remain committed to the advocacy for the rescue of the Chibok girls and everyone held captive by BH…#BringBackOurGirls #ChibokGirls

On this day 14/04/2014, Chibok girls were abducted.
One man came with a promise that he will rescue them.
But the number of abductions now surpassed the one we had then.
Please find time to pray for insecurity in Nigeria not forgetting the Chibok girls.
CRUISE WITH KIDD

Seven years today, 219 young women who trusted our country to protect them, were abducted from Government Secondary School in Chibok, Borno State.

One hundred and twelve -112 of our girls and Leah Sharibu are still unaccounted by @NGRPresident .

No word. No closure, @MBuhari ?