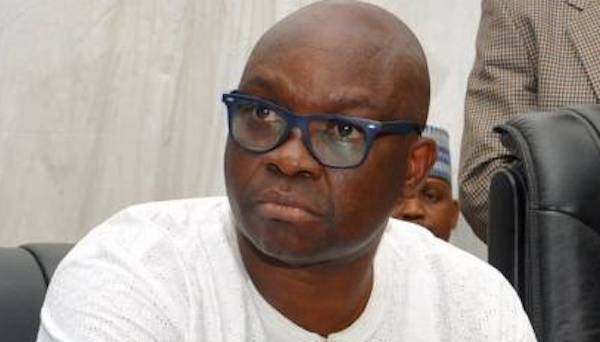 Former Ekiti state Governor under the umbrella of the People’s Democratic Party (PDP), Peter Ayodele Fayose, has made a shocking declaration that seems to be rocking his party.

Fayose in a tweet on Wednesday, made his opinion public to not support his party to field Alh. Atiku Abubakar as the party’s presidential candidate.

“The current President of Nigeria is a 2-term Northern Presidency, thus implying that it MUST be a Southern Presidency in 2023 or NOTHING. Awa ‘South’ lo kan’. Nigerians should await details soon,” the tweet read.

“The PDP Constitution provides for a rotational Presidency. Section 3(c) provides that the Party shall pursue its aims & objectives by ‘adhering to the policy of the rotation & zoning of Party & Public elective offices in pursuance of the principle of equity,justice and fairness’.”

Ripples Nigeria had earlier reported that Ekiti State Governor-elect, Mr Biodun Abayomi Oyebanji, paid a thank you visit to the former Governor of the State today.

Nigerians have taken to social media to speculate that Fayose was probably drumming for the support of Ahmed Bola Tinubu.

The current President of Nigeria is a 2-term Northern Presidency, thus implying that it MUST be a Southern Presidency in 2023 or NOTHING. Awa ‘South’ lo kan’. Nigerians should await details soon.

Just imagine Seyi Makinde didn’t hold his ground to ensure Amb Taofeek Arapaja emerge in the SW zonal congress in Oshogbo and eventually become Deputy National Chairman (South) of the PDP, Fayose would have handed the entire SW structure to Tinubu on a platter.

Fayose is only interested in Tinubu’s money, the man sold PDP out in the last Governorship election, I’m not surprised by the public display of shame. pic.twitter.com/C4QShHXLn5

Tinubu is a top politician. He has infiltrated the opposition Party in SW and we can see that from the Opposition Primaries in Ekiti & Osun. It worked in Ekiti but failed in Osun. The Ekiti Governor-elect just paid thank you visit to Fayose. Sadly, many will fall for these moles.

Fayose to APC loading? PDP should just have picked a candidate from SE, a region that has voted the party since 1999 and they would have saved themselves a lot of mess. https://t.co/57BlLy3uit

Ayodele Peter Fayose is fully BATified!
If you know you know!
Opposition in the mud 🤣🤣🤣#BAT2023 pic.twitter.com/TZ6qLTqHrO

So Ortom, Wike, Fayose and possibly Makinde may join the Tinubu group soon 😁😁😁.
If you like take politics too serious. If you like, take Politicians too serious. The joke is on you.

No better time to bring back this video of Ayodele Fayose.
"I’m looking at them like a BAT" pic.twitter.com/UNXPB8V2sV

In another trending event, the league of actors 2023, made a video trending on social media to support the All Progressives Congress (APC) presidential candidate, Asiwaju Bola Ahmed Tinubu.

The video, already making rounds on social media, has prominent actors and actresses in the movie industry drumming up support for Tinubu.

The video has since generated controversies as some Nigerians expressed displeasure for the support while others saw no harm in it.

Yoruba Nollywood comes out in full for BAT. pic.twitter.com/zSxjn8Mh7G

Psquare are free to support Peter Obi, it’s their right.

Yoruba actors/actresses are free to support Tinubu, it’s their right.

People who value greatness came out to support Bola TINUBU, you call the Yoruba Nollywood hungry, were footballers hungry too? The likes of Okocha and Kanu? Na everybody hungry and terrible if they ain’t supporting your favorite.

The fact that there was a graveyard silence among these Yoruba Nollywood actors and actresses during this Buhari disastrous regime despite how they all trooped out in numbers to protest during Jonathan’s regime says all you need to know about how corrupt and compromised they are.

A group of Yoruba actors made a jingle for BAT and you started ranting.

Psquare, Phyno, Flavour and a number of South-South & South-Eastern celebrities are rallying support for Peter Obi, so what’s the problem?

We cannot move forward with these double standards.

Competence lo kan, it's not about tribe. Tinubu is failing even before becoming the president. Sane yorubas like me who are not tribalistic will not vote him. It's time to stop all these tribal bullshit

Yoruba Nollywood did campaign for BuBu , why are y’all surprised they are doing for BAT? It’s not even about tribal whatever . You have your right , I have mine.

I can decide to give Kwankwaso my vote, it’s my choice .Campaign harder for your own and let’s hope the best man wins