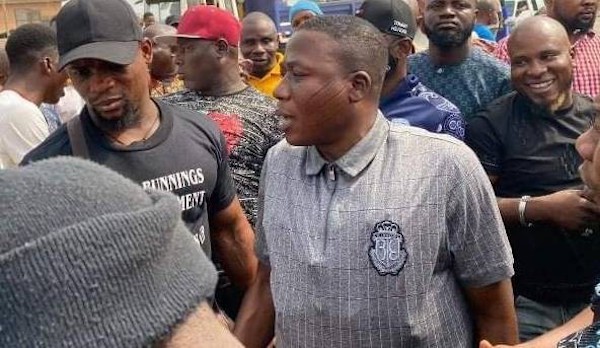 A viral video clip of the Attorney General of the Federation and Minister of Justice, Abubakar Malami (SAN) addressing the press on the re-arrest of the Leader of proscribed seccesionist group, Indigenous People of Biafra (IPOB), Nnamdi Kanu, in Hausa language has triggered angry reactions from social media users.

Malami had made the announcement detailing Kanu’s re-arrest and extradition back to Nigeria on Tuesday both in Hausa language and the English language.

He has since come under fire for his actions as many wondered when Hausa became the country’s official language.

Others who also condemned the Minister’s action stated that the singular act had amplified government’s percieved bias and preference of one ethnic group above the other.

However, speaking with Daily Independent on the matter, the Minister’s spokesperson, Dr Umar Gwandu said his principal had first addressed the media in English language before speaking in Hausa for the sake of International media stations such as British Broadcasting Corporation (BBC) Hausa who had requested the gesture.

“If you have any journalist who attended the press conference, you can call him to verify. He (Malami) first spoke in English language but because there was BBC Hausa and other international media stations that broadcast their programmes in Hausa language at that press conference, these stations asked for insert because of the essence of soundbite and the minister obliged them by speaking in Hausa. Radio station is different from newspaper or television.

“The Minister spoke in Hausa, which is one of the three major languages in Nigeria because he understood and can speak the language. He would have done the same if he can speak Igbo and Yoruba too. Non-English speakers should not be denied access to news,” he said.

Social media is also rife with reactions to the recent attack on the Soka Ibadan residence of Yoruba Nation agitator, Sunday Adeyemo, popularly known as ‘Sunday Igboho’ on Thursday by unknown assailants.

According to Mr Igboho’s Spokesperson, Mr Olayomi Koiki, some men in military uniforms stormed Igboho’s home in a midnight raid which left two dead and one missing.

“I can confirm that those who came are definitely Nigerian soldiers. There were more than 100 soldiers that came,” Mr Koiki said in a Facebook live.

“The situation now is very bad. Two Yoruba sons have been killed in the house of Chief Sunday Igboho. The two dead bodies have been taken away by the military. We do not know of the location where they were taken to.”

Mr Sunday, who reportedly escaped the incident, also confirmed in a telephone conversation with BBC Yoruba the claims that the attack was carried out by men of the Nigerian military.

Video footages from Igboho’s residence showed massive destruction on his valuables and properties. Bullet holes were reportedly found in cars parked in the compound while blood-stains were seen in the premises.

The attack, which is coming days after leader of separatist group, IPOB, Nnamdi Kanu was nabbed by the Nigerian government, is said to have disrupted plans of a Yoruba Nation mega rally billed to hold in Lagos state on July 3.

While there are speculations, however, that the attack was staged by Igboho to avoid a similar Kanu fate ahead of his planned rally, others have given their take on the matter thus:

Nigerians on social media have made rib-tickling reactions to the ban on the use of mannequins by tailors and boutiques in Kano state as declared by the Hisbah board.

According to the Commander General of the board, Sheikh Haroun Ibn Sina, the use of mannequins contravened the provisions of the Islamic injunctions especially on idolatry.

In a statement issued to newsmen in Kano on Wednesday, Haroun said: “Hisbah prohibits the use of mannequins at shops, commercial, private residences and other public places. This violates Islamic provisions. It is also responsible for inciting immoral thoughts amongst some members of the public. All these are against Islam.”

He warned that the agency would soon embark on mass raiding to flush out mannequins from the state.