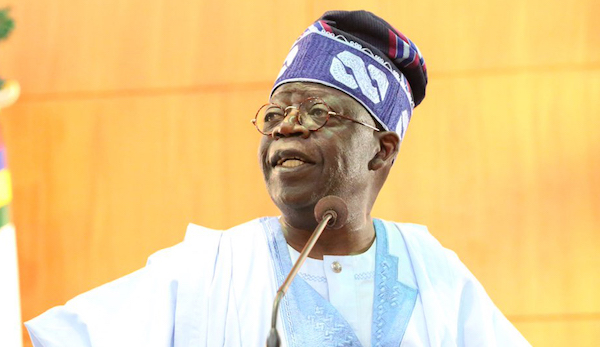 Social media users on Monday celebrated the National Leader of the All Progressives Congress (APC), Bola Ahmed Tinubu on the occasion of his 69th birthday anniversary.

The one-time Governor of Lagos State received birthday messages from Twitter users as well as fellow politicians, who all hailed him as the ‘Jagaban of Lagos’ and a political ‘master strategists’.

President Muhammadu Buhari’s aide on New Media, Ahmad Bashir also penned a heartfelt tribute to the ruling party’s leader, referring to him as a “visionary, progressive and a good friend” to the President.

Meanwhile, controversies over Tinubu’s actual age heightened on Twitter, as data from online encyclopedia, Wikipedia, put his age at 79, and not 69.

Many who agreed with Wikipedia’s data have called Tinubu’s acclaimed 69th his ‘football age’ and a strategy in line with his alleged 2023 presidential ambition.

Bro I don't think it is Nice to call an individual a National Leader When you have a Sitting President.

Shehu Sani understands Hausa and Fulfulde, yet he still lost the election to return to the senate. A case of a man with both ears functioning well but can't hear nor understand.

And now the country is collapsing under APC government. What a tragedy!

Happy 69th birthday to a political maverick, master strategist and a leader of leaders who demonstrates patriotism, statesmanship, selflessness with enduring legacies. @AsiwajuTinubu is a blessing not only to the South West region but Nigeria and the African continent as a whole pic.twitter.com/x6Ctn2gxlU

Asiwaju will be 71 by 2023. Haven't we lost a good chance to have a competent leader at the prime of his vitality?

I love to see a talented leader like BAT at the helms of affairs but I have now learnt that age matters so much for that rigorous job.

Nothing…..just an henchman paying tributes to his godfather😐

On a more serious note, why are these people trying to force this "Happy 69th" down our throats?

Why not jejely wish Tinubu Happy birthday, must you mention the age???

Wetin this people thinks say we be sef?? pic.twitter.com/nfV8YG02QA

They literally just changed it 4 mins ago pic.twitter.com/FzvLRJGolb

Happy 89th birthday to the President Nigeria will never have in the name of Jesus, amen🙏 pic.twitter.com/ZTBlV8jjRl

Femi Adesina’s denial that the Buhari-led administration promised to make one Naira at par with the Dollar also caused outrage from social media users on Monday.

The President’s Special Assistant on Media and Publicity, while speaking in an interview with Channels Television’s “Sunday Politics”, said that there was never a time President Buhari made such a promise, maintaining that the claims were “fake, false and apocryphal”.

Nigerians have however dragged Adesina for his ‘blatant denial’ of the campaign promises attributed to his principal, allegedly made during a campaign rally on Monday, March 23, 2015, at the Dan Anyiam Stadium, Owerri as reported by The Cable and Vanguard Newspapers.

In the story credited to government-owned News Agency of Nigeria (NAN), Buhari had reportedly said “It is sad that the value of the naira has dropped to more than N230 to one dollar. This does not speak well for the nation’s economy,” with nothing else apart from the title of the story suggesting that he had made the said claim.

Someone said listening to Femi Adesina can be depressing. 😂😂