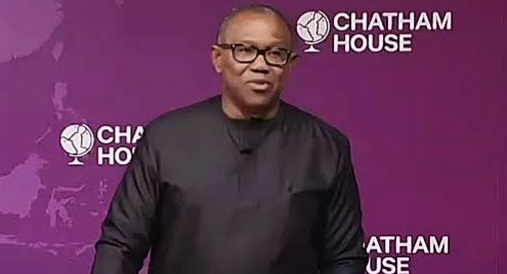 Nigerians on social media have been expressing their thoughts over the appearance of Peter Obi at the Chatham House to discuss his plans and policies if elected as the Nigerian President in the coming election.

The Labour Party presidential candidate promised, among other things, to reduce ethnic conflict brought on by injustice and exclusion, as well as enhance Nigeria’s energy production.

Recall that Chatham House already invited the presidential candidate of the All Progressives Congress (APC), Ahmed Tinubu, for questioning on his plans and policies.

Nigerians took to social media to compare the two events; here are some reactions:

As long as we have some Nigerians in IDP camp, we are all IDPS- Peter Obi in Chatham House.
It means when one is affected, we should all feel affected.

I can finally confirm the stinginess of Peter Obi after watching his Chatham house interview.
Unlike his follow presidential candidates, whose questions are shared to staffs in the name of team work.
Peter Obi, didn’t share one question to anyone.
I love dis mans stinginess.👍🏾 pic.twitter.com/z6kuiAIQ6v

TableShaker jam ShookuShaker for Chatham House and went MIA. Your papa for try.

Chatham House did well. They invited Mr Bulaba first so APC thought he will be the only one.

He went on a show of disgrace. Now, you can see the difference from Bala Blu!

Peter Obi's full Chatham house speech. Even if you don't support him, the way he speaks his ideas will make you listen atleast. pic.twitter.com/hvted954kk

HE Peter Gregory Obi's Opening Statement at Chatham House, London. Nigerians, watch this and be proud of our INCOMING President. This is a very proud moment for Nigerians and Obidients.🔥 #CHAfrica #ObiIsComing #ObiInChathamHouse #PeterObi4President2023 #PeterObiForPresident2023 pic.twitter.com/Wqdwh8VZ2P

Tinubu's appearance at CHATHAM House was disgraceful and embarrassing! He couldn't answer basic questions but kept shaking like jellyfish. @PeterObi's outing at Chatham House was so presidential & outstanding. It was a stellar performance from Obi whose popularity keeps soaring pic.twitter.com/7TwlifnxMc

The alleged invasion of the Central Bank of Nigeria’s (CBN) headquarters on Monday by the operatives of the State Security Service (SSS) was also widely discussed on Monday.

Although the allegation has been denied by the DSS, Nigerians had already reacted thus:

Some people held a protest for the removal of CBN governor Godwin Emefiele.

Question is, who is funding this group and who want the removal of CBN governor?

CBN Governor Emefiele is currently on the run as his office at the Headquarters of the apex bank has been taking over by men of the DSS. The desperation of Emilokan knows no bound, May Nigeria never see his kind in power, Amen. pic.twitter.com/AUm1HzTOiu

They used Godwin Emefiele big time and the man was just a big time willing tool.
The money he allegedly looted as the CBN Governor is alarming.
Now they declared him wanted. Emefiele should answer all the questions and name his accomplices. pic.twitter.com/zcg9zVc9Uo

Please, what exactly is the offense of the CBN Governor that he’s being declared wanted? I am totally lost.

Whether the allegations against the CBN Governor, Emefile be true or false, one thing is certain: this sudden quest for his head is pure politics and can't be separated from the new naira notes policy and the forthcoming elections.

Has CBN Governor, Godwin Emefiele run away?
Why would they declare someone they know his house and office wanted?

They could just issue a warrant for an arrest and then go ahead and pick him up for interrogation.

The CBN Governor has obviously stepped on foot he shouldn't either by the recent cash policy or other things. They are only looking for scapegoat.