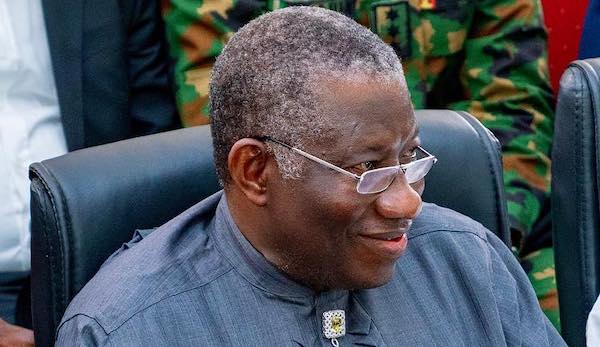 In a shocking twist of fate, social media has been thrown into frenzy as former President under the umbrella of the People’s Democratic Party (PDP) might be running for President in 2023 under the ruling All Progressive Congress (APC).

Ripples Nigeria gathered that a ‘Fulani group’ had on Monday purchased the N100 million nomination and expression of interest forms for the ex-president to run.

Jonathan had served as the deputy governor of Bayelsa state and becoming the governor on the platform of the PDP, before going on to become Vice President and President between 2007 and 2015.

While the presidential forms have been bought, Nigerians are wondering how Jonathan could be sold an interest form by a party he probably isn’t a member of.

Goodluck Jonathan is running. This is 100m.

Goodluck Ebele Jonathan will play into the hands of those who don’t wish him or Nigeria well. I don’t care if it was MEND or Fulani Group who purchased the N100m APC Form. GEJ should remain untainted. He should enjoy his Envoy Missions & live out his life as an elder statesman.

So Goodluck Jonathan has dumped the opposition PDP and now member of our great party, the All Progressives Congress (APC).

Some expressed shock on the latest development:

Goodluck Jonathan contesting under APC flag that sent him packing in 2015? This is unimaginable.

A Fulani group has reportedly purchased the APC Presidential Candidate Nomination Form for Goodluck Jonathan. Where did they see money? 👀 pic.twitter.com/p9Nk88fKAV

IF it is true that GEJ has bought APC form, you have to sit down and consider what a waste of time the last 8 years of your life have been fighting people and making enemies because of Goodluck Jonathan.

In another news, Nigerian students, parents and family have shown displeasure on the latest update from the Academic Staff Union of Universities (ASUU).

ASUU declared an additional 12 weeks strike to the already two-month old strike as negotiations stalled between the organization and the federal government.

#BREAKING: @ASUU_NGN Has Just Extended The Warning Strike By 3 Months.

The National Executive Council, NEC, of the union made this known via press briefing few minutes ago.

"We have decided to extend the strike till August 1st, 2022" – @ASUUNGR Chairman#ASUU#ASUUstrike

My thoughts are with the Nigerian students affected by the ongoing #ASUU strike.

It’s so unfortunate, Nigerians are still suffering for 62 years and counting. 🤦🏾🤦🏾

Studying in a federal university in Nigeria is now a crime. Even though the offence is not stated in written law but we are facing the punishment. An indefinite strike is looming. #ASUU #EndASUUStrikeNow #EndASUUStrike pic.twitter.com/PAts7EhG2z

ASUU: To begin an indefinite strike.

Together with VCs, they suspend student unions or impose their preferences on the student body, resulting in today's useless NANs.

You don’t want students to fight injustice but you need support in your own fight against the injustice meted out to you by FG.

Are you in Ekiti
Let's come together in one voice
Let's put an end to #ASUU
Enough is Enough#EndASUUStrike pic.twitter.com/NPEsQLZBFq

I Think The Energy The Nigerian Youths Put In During The End Sars Protest, Same Energy Should As Well Be Chanelled Into #EndASUUStrikeNow
#ASUU pic.twitter.com/tuYOMWz28r

Nigerian students threaten to close airports, others over ASUU strike