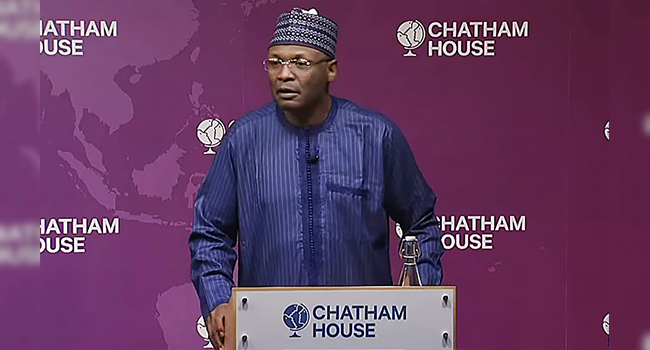 Reactions have trailed the appearance of the chairman of the Independent National Electoral Commission (INEC), Prof. Mahmood Yakubu, appearance at the Chatham House on Tuesday.

The Chairman delivered a lecture on the topic ‘Nigeria’s 2023 Elections: Preparations and Priorities for Electoral Integrity and Inclusion’.

Prof. Yakubu gave a breakdown of voter registration and collection of Permanent Voter Cards in Nigeria while highlighting the various attacks on 50 facilities of the commission in four years.

Many on social media passed a vote of confidence, while others questioned his capacity.

This INEC chairman has some kind of aura of "everything will go well with the election" about him.
Reassuring 👌 pic.twitter.com/nsyCosxymJ

Prof. Mahmood Yakubu, the INEC chairman, says that the elections in 2023 will be the greatest ever held in Nigeria.

In truth, all Nigerians are asking for from INEC is free and credible elections.
Can they deliver on this mandate? pic.twitter.com/XW4CefLorp

The only person who seem to operate without ‘under the seat pressure’ in Nigeria political space right now is the INEC Chairman.

Man seem so relaxed, you can feel he’s been truly granted independence from the presidency to do what he presume fair.

The greatest enemy of what is right is act of political, social, moral, economical, religious- correctness..INEC chairman deceiving the world by political correctness. Yet INEC staffs disenfranchising many slowing PVC collection or total refusal to release them before deadline.

Your Presidential candidates ,
Your INEC chairman all goes to present themselves in the UK
Plus the Auditioning in Nigeria with British High Commission.
You think you have a country
Oponu Generation
No critical thinking..Zombie

Obasanjo, who acted as senior Prefect, was joined by the leadership of the old boys association and large numbers of the current students, entertained residents, motorists, and passers-by during the walk.

In videos now making the rounds, the former president and others were walking amid the singing of the school anthem, among other songs, through Oke Egunya, Igbore, Oke Igbein, and at Omida, the palace of Oba Omolade.

Many Nigerians were quick to appraise the former head of state while drawing a comparison with the presidential candidate of the All Progressives Congress (APC), that has not declared the secondary school he attended.

16/01/2023
Joined current and alumni students of the Baptist Boys’ High School in Ogun state, on an 18km walk. pic.twitter.com/sOcgbuISd0

This is former president Obasanjo, who is far older than omo IRAGBIJI, doing 18k walk with his verifiable alma mater.

Let bala blu do just 1k walk and I'll vote for him. pic.twitter.com/NhspG5AjGX

Obasanjo joined current and alumni students of the Baptist Boys’ High School in Ogun state, on an 18km walk. We challenge your candidate to do same if its sure for him. pic.twitter.com/jnTs15k9Eh

Obasanjo is acting the role of Senior Prefect as his former secondary school (Baptist Boys High School) marks 100 years with Road Walk. This baba is moving strong in his 80s 😂😂 pic.twitter.com/sEMg6iDhkM

Our former president, Olusegun Obasanjo joins students on an 18km walk as Baptist Boys’ High School marks the centenary.
And some of our aspirants can't stand for an hour let alone walk…🤔🤔

Meanwhile, Baba Obasanjo wants your Tinubu to have a reunion with his old boys and take a 18km Walk. pic.twitter.com/IDzqmqcdnv

‘No cause for alarm,’ Ondo govt allays fear on Akeredolu’s health