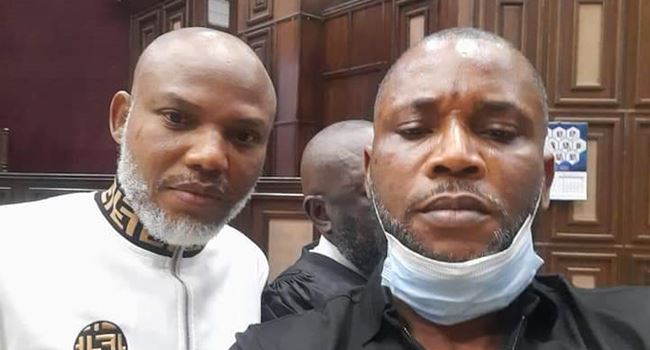 Social media users reacted to Thursday’s court appearance of the leader of proscribed Indigenous People of Biafra (IPOB), Nnamdi Kanu, who was re-arrested and detained by the Nigerian government in June.

The IPOB leader, whose absence from the last court sitting in July had sparked public outrage, was arraigned before a Federal High Court in Abuja on Thursday amid heavy security.

The seperatist group leader pleaded ‘not guilty’ to all amended seven-count charges levelled against him by the Federal Government, bothering on treasonable felony and acts of terrorism.

Security operatives barred journalists from entering the court, but images that surfaced online from within the court premises showed that Kanu was in good spirits as he appeared happy and could be seen smiling.

At the court gate, his supporters could also be heard chanting choruses and songs of solidarity, referring to the IPOB leader as “another saviour”.

His case was adjourned to 10 November.

See some social media reactions below:

The Nigeria Railway Corporation has halted services on the Abuja-Kaduna route following allegations that a part of the train track was bombed by bandits.

Former Kaduna Senator, Shehu Sani had earlier on Thursday, disclosed that a Kaduna-Abuja train he had boarded on Wednesday was attacked between Dutse and Rijana stations by armed bandits who planted an explosive that damaged the rail track.

Sani wrote on his verified Twitter handle: “Yesterday (Wednesday) terrorists attacked the Kaduna-Abuja railway with an explosive and opened fire on the train, targeting the engine driver and the tank.”

He said the bandits were targeting the trains in order to dispose passengers of their cash and other valuable possessions. He also said the attackers opened fire on the train driver.

Images of the dilapidated train and rail track have surfaced online.

Nigerians are decrying the growing sophistication of bandits in the country: