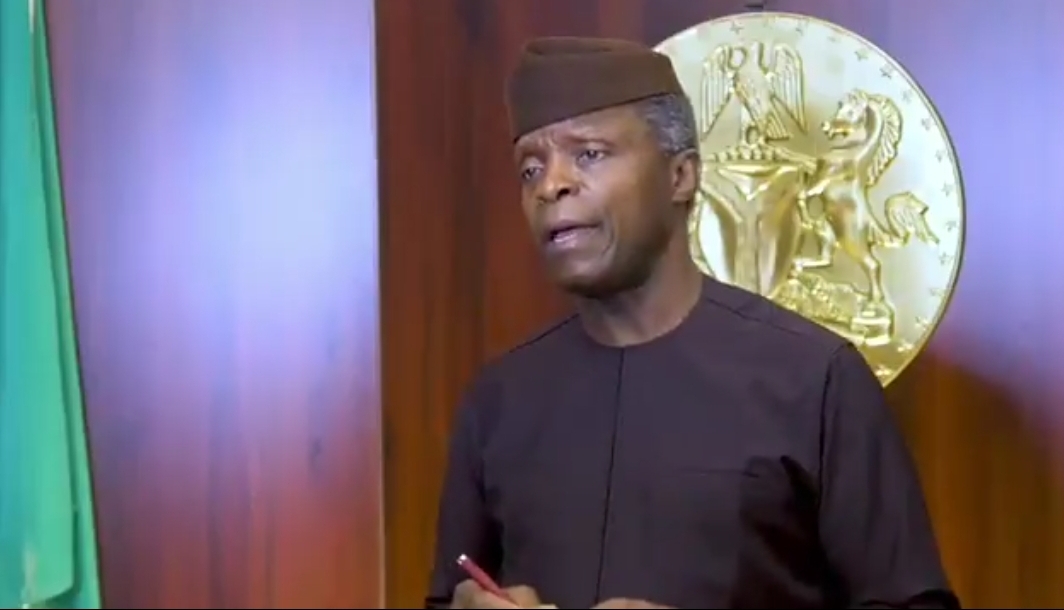 The abduction of schoolgirls in Jangebe in Zamfara state and the speech on cryptocurrency by Vice President, Prof. Yemi Osinbajo were some of the most-engaged discussion trends on social media on Friday.

Social Media users pushed for the rescue of yet another set of abducted pupils from a Government Girls Secondary School in Jangebe, Zamfara state by suspected armed bandits.

At least 317 school girls were reportedly kidnapped after the attackers invaded the school premises, heavily armed, in the early hours of Friday.

Security operatives deployed to the area are said to have begun a joint search for the abductees and their captors, but Nigerians on social media are decrying the rising spate of insecurity in the North.

The attacks have persisted despite negotiations initiated by the state governments and Islamic Cleric, Sheikh Abubakar Gumi with the bandits.

The latest abduction is coming only a week after students and staff of a Government Science College in Kagara, Niger State were kidnapped by armed bandits with no report yet of their release.

Who is scared of young northerners getting an education?

Why are these bandits attacking schools repeatedly?

Who is cashing out from this scam and criminality?

What will the federal government do about this endless kidnapping?

Why is Shiek Gumi on about amnesty?

Those who are spraying fragrances on the feaces of these bandits can now see the futility of their action.

Just last week it was #freekagaraboys, today we have a new hashtag #RescueJangebeGirls, who knows tomorrow what hashtag we will come up with? Perhaps one for ourselves when we get caught up in one of these daring attacks. This is sad & heartbreaking, I feel helpless & hopeless 😪

But why will Zamfara still operate boarding house system under the insecurity that pervades Nigeria? If you have your child in a boarding school in Zamfara, Katsina, Kaduna, Niger, and other vulnerable states, go withdraw them NOW! @MBuhari can’t secure them! #RescueJangebeGirls

FG, prepare the ransom as usual!

The Zamfara girls will be rescued.
Nigerian citizens should remain calm & stop exaggerating these things.

The army and DSS knew where bandits are hiding they didn't invade and arrest them (at least Gumi is available to help) but it's Sunday Igboho they preferred to arrest this afternoon if not for the people that rebel against it.

This country is sick.

Gumi's Holy Bandits.
They ain't criminals but servants of god in the forest.
They just lunch a crusade with over 300 school girls in Zamfara. Government will pay into the offering box in due date. Maybe Gumi may earn the Zakkat who knows? This Holy Evangelism is the new ministry. pic.twitter.com/HnOeIXfmeH

The bitter truth is that the North is reaping the harvest of their Almajiri system.

Sheik Gumi getting ready to start another negotiating tour…. pic.twitter.com/QXTxZ22rPf

I have to mute the words Sheikh and Gumi from my TL because my blood boils whenever I remember/see the whitewashing of terrorists. As if bandits wasn’t watered down enough.

Prof. Yemi Osinbajo’s call for a regulation rather than prohibition of Cryptocurrency trading in Nigeria had Twitter users talking on Friday.

The Vice President shared a snippet of his meeting with the Bankers Committee Vanguard. In the video titled ‘We must act in knowledge, not in fear’, Osinbajo noted that blockchain technology was indeed the future of banking and that adopting the new development called for prudence and care.

“There is no question that blockchain technology and digital currencies in particular will in the coming years challenge traditional, including reserve banking in ways that we cannot yet imagine,” he said

“The point I’m making is, some of the exciting developments we see call for prudence and care in adopting them and this has been very well articulated by our regulatory authorities.”

Nigerians also called out the perceived lack of synergy between the Federal government and the Central Bank of Nigeria (CBN) after the CBN Governor, Godwin Emefiele had recently described cryptocurrency as “money created out of thin air”.

Honestly, Buhari and his cabals are rubbishing this man’s pedigree.

Osinbajo speaks against the government policies like he’s a Nigerian living in Canada and not the Vice President of said government.

“The people are upset again, what are we going to do?”

"Crypto currency should be innovatively regulated, not prohibited; we must act with knowledge not fear" — VP Yemi Osinbajo.

Yemi Osinbajo is a brilliant man. His take on the cryptocurrency issue shows that but it also shows lack of synergy between policy makers in taking decision about the country. Person go just wake up, make policy on him own without consultations. The problem we have here.

Prof Osinbajo has ‘spoken’ out about the cryptocurrency trading ban. Me I just want to know, has he told his boss all these things he’s yarning in Queens English?

Why this harassment of CHIEF SUNDAY IGBOHO by agents of a government that knows the whereabouts of bandits who live inside remote forests and won't go near them but have the temerity and shamelessness to terrorize a man who lives in his own beautiful home in Ibadan city!!! pic.twitter.com/70fHCm3VI5

The army and DSS knew where bandits are hiding they didn't invade and arrest them (at least Gumi is available to help) but it's Sunday Igboho they preferred to arrest this afternoon if not for the people that rebel against it.

This country is sick.

..I condemn this attempt to ambush& abduct him. It is not only reckless but also very dangerous. If the security agencies want to see him all they need to do is to invite him to their office. I am not aware of any crime that he has committed & I urge restraint on all sides. 2/

I condemn in totality the pathetic attempt to arrest Sunday Igboho earlier today. This is yet another deliberate act of provocation by the Fulani Caliphate. No #Fulani mass murderer, Miyetti Allah or bandit is under arrest. #Nigeria is on the brink! Igboho should not be touched.

They ordered DSS to Detain Sunday Igboho because he is a threat to national securities. But Gumi is seen as a patriot for negotiating with criminals. Just think about this for 3 mins and you will realize Buhari and co. will lead this country to destruction soon. I won cry like dz

What DSS and co did with Sunday Igboho is an attempt to divert attentions from the over 300 school girls kidnapped by bandits/terrorists at Zamfara.

Government knows where bandits and Boko haram are, they can’t deploy DSS & Soldiers there but Sunday Igboho is their main problem. This country don finish.
If u like dey wait for e go better🚶🏾

What DSS and co did with Sunday Igboho is an attempt to divert attentions from the over 300 school girls kidnapped by bandits/terrorists at Zamfara.