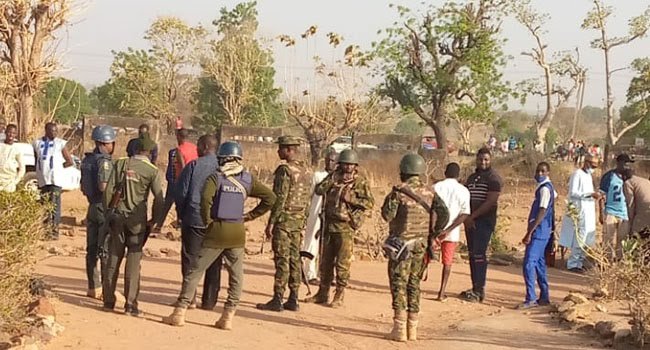 Social media users in Nigeria on Wednesday reacted massively to the latest abduction case in the country, decrying the worsening security situation.

The recent attacks unleashed by suspected armed bandits on Government Science College, Kagara in Niger State, saw at least 27 students abducted as well as a few teachers residing within the College Staff Quarters.

The attackers who were said to have stormed the school at about 2:00a.m on Wednesday, reportedly dressed in the school uniform, began shooting sporadically leaving at least one dead and a few injured.

The incident, which closely follows the kidnap of 333 school boys from a Government Science Secondary School in Kankara Local Government in Katsina state, has been heavily condemned by many Nigerians.

Social Media users also queried the possession of the highly sophisticated weapons being used by these assailants as revealed in a viral footage, and the government’s daunting failure to label the perpetrators “terrorists” rather than “bandits”.

Or is that not a sticker am seeing?

Terrorists who abducted 21 persons in Niger state released a video threatening captives and state authority. Over 500 are captives of #BokoHaram in northeast. In the northwest/central, families are raising millions for ransom to free hundreds of their relatives. THIS IS ANARCHY. pic.twitter.com/AgHloswa33

Nigeria has never been this insecure before, everything is falling apart under Buhari. Students are being abducted in their schools, people are being kidnapped on their ways, farmers are being slaughtered in their farms. Imagine bandits with RPG. #FreeKagaraBoys #SecureNigerState pic.twitter.com/TISBAruC6u

The terrorists never told us for one day to call them bandits. It was the government that named them bandits, in a bid to deminish the magnitude of their criminal activities #SecureNigerState #FreeKagaraBoys

Youths spoke up and were referred to as terrorists, another group take up arms and RPGs and we call them bandits.

"Bandits with RPG" a complete joke!

According to Buhari's government, terrorists are the patriots and protesters are the traitors!
Good afternoon Nigerians!

These terrorists receive money through a means. What has the CBN done so far to trace and block those accounts. These guys use a medium to communicate when negotiating, what has NCC done? They have a face or spokesperson that helps them with the dialogue. We need answers!

Robbers belonging to a gang and typically operating in an isolated or lawless area are called bandits.

Bandits with RPG are terrorists in a lawless country called Nigeria.

How are terrorists abducting hundreds of schoolchildren and transporting them across state lines for days and nobody in govt is aware? How do they plan the logistics so effortlessly?

At this point,
This banditry and terrorism is either state-assisted or fully state-sponsored.

This insecurity is not normal, these tattered haggard dirty church rats cannot afford the arms they use, I doubt if they even benefit much from ransoms paid, this thing is political, it is sabotage, there are definitely people who don’t want to see the North & Nigeria stabilize. pic.twitter.com/sQt01qbsst