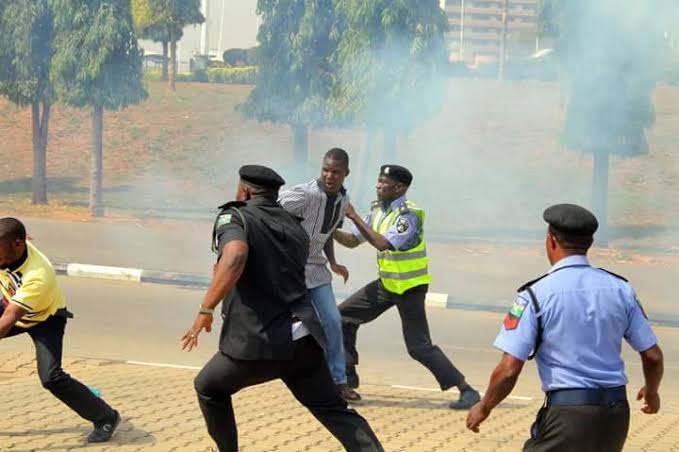 Angry reactions have trailed reports of violent clashes between Nigerian military and members of the Islamic Movement in Nigeria (IMN) otherwise known as Shiites, in the Gwarinpa district of Abuja on Tuesday.

Members of the sect had come out in their numbers to observe their annual Arbaeen trek to mark the 40th day of the murder of Imam Hussein, the grandson of Prophet Muhammad who was killed on 10th Muharram.

At least eight protesters were reportedly killed and others injured after men in military uniforms opened fire on the protesters.

According to the Police Spokesperson at the Federal Capital Territory (FCT), DSP Josephine Adeh, 42 protesters were nabbed for causing mayhem in the FCT.

The suspects, she said, carried charms, and threw stones and some minor explosives at security operatives.

She added that the military were able to bring the situation under control despite being attacked by the protesters, stating that no casualty was recorded.

A viral video footage has however emerged, exposing some military men brutalizing unarmed Shiite protesters and inflicting injuries on them.

Reacting to the disturbing footage, Nigerian Publisher and Rights Activist, Omoyele Sowore, wrote on social media: “This is a video of another bloody attack on Shiites in Gwarinpa area of Nigeria’s Federal Capital, Abuja today, by a detachment of the HQ Nigerian Army and the Nigerian Police Force. This video captures gruesome attacks that involves beating, sta**ings with bayonets and at least some gunshots. Six persons are killed today as President Muhammadu Buhari continues to order the extrajudicial killing of innocent and defenseless citizens across Nigeria”

A Facebook user, Osaretin Patience also wrote: “Are these really security operatives, or some wicked fellow empowered to treat citizens in such a wicked and barbarous manner? It’s a pity.”

Absence of defendant stalls trial of ex-FIRS directors, seven others for alleged fraud