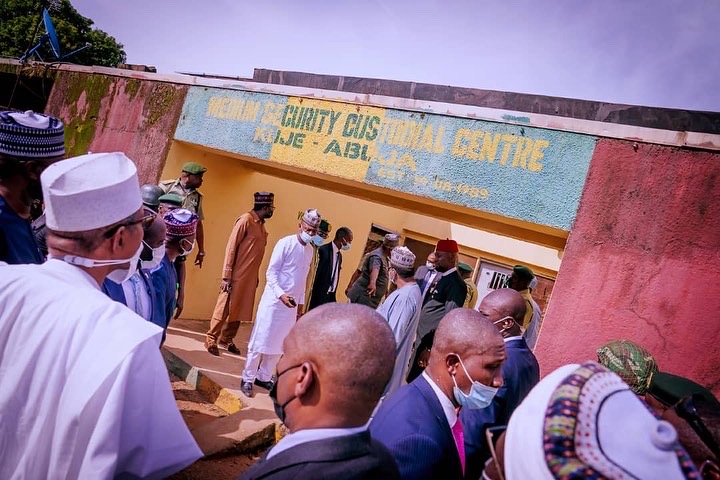 Nigerians on social media have expressed their displeasure with the security situation in the country, especially after unidentified attackers freed hundreds of inmates in Kuje prison, Abuja.

According to Masashi “About 994 inmates, we have about 600 already inside now.

“Many people are being recaptured. The people who came to do this, from the records, belong to a particular group, from all indicators they are Boko haram.

President Muhammadu Buhari who visited the scene was furious in his reaction and demanded a full scale report.

Atiku Abubakar, Reno Omokri and other Nigerians have since condemned the act.

Saddened by the attack on the Medium Security Custodial Centre, Kuje. I am disappointed with the intelligence system. How can terrorists organize, have weapons, attack a security installation and get away with it? I am expecting a comprehensive report on this shocking incident.

#kuje #Daura Terrorists have tested Nigeria &found her wanting;a state that cannot defend itself or its people. Perhaps we can now stop pretending about the efficacy of the fight against terror, own the failures& accept we are at war!These truths may enable the right response.

KUJE PRISON BREAK: Nigeria-a nation where terrorists are routinely pardoned after gruesome murders; Where herdsmen get to hold press briefings after massacres..Storming a prison in the nations’s capital to free their comrades shouldn’t be a big deal. No? Goodluck with that 2023. pic.twitter.com/5zNsCgZZ4i

I am concerned and saddened by reports of the attack on Kuje Prison by suspected terrorists. My concern arises not only from the prospects of the escape of detained terrorists and hardened criminals but of its implications

Thank God Nnamdi Kanu was not at Kuje prison. Who knows what those terrorists would have done to him as they stormed the prison. You can imagine. They kept a freedom fighter in maximum security with DSS, and left hardened terrorists in Minimum security in Kuje! #TableShaker

Kuje prison has been attacked for the umpteenth time under President Buhari's watch.Terrorists have been shooting for over 1hr without any trace of resistance

While the president convoy was getting attacked in Katsina by a set of bandits , another set of bandits where attacking Kuje prison. If this is not failure in governance, then I don’t know what failure is

It's funny how News outlet still call them bandits, the truth is bandits don't have the balls to attack the most guarded prison in Nigeria ( Kuje) nor does it have the capacity to attack President Buhari 's convey. They are Terrorists and not Bandits. Nobody is safe anymore!

Kuje is inside Abuja. How did terrorists drive through Gwagwalada, or Madalla/Suleja axis before getting to Kuje? Whatever it is, the Minister of Defence should be sacked immediately because this is a terrible security breach, and a disgrace on the federal government.

I hate to be the bearer of bad tidings, but a jailbreak that has now been confirmed to have freed ALL Boko Haram inmates at Kuje Prison only means one thing for the people: coming misery.

Social media has also been buzzing over claims that veteran Nollywood actress, Funke Akindele, had been nominated to deputize Olajide Adediran, in the Lagos State gubernatorial election.

The news, already making waves, came as a surprise to many Nigerians, as many were shocked that the actress had been involved in politics.

The graduate of University of Lagos has been in the news recently after her marriage with her husband collapsed, according to JJC Skillz.

As at the time of filing this report, neither Funke Akindele nor any of her media team has rejected or accepted the claim.

This has not stopped Nigerians from reacting.

Lagos PDP actually moved from Jimi Agbaje to giving their governorship ticket to Jandor and Funke Akindele, no wonder Sanwo Olu isn't taking his campaign seriously after winning the return ticket, I'm even beginning to think APC is the one incharge of PDP faction in Lagos state

I never knew Funke Akindele was into a politics.

Her first political announcement is her being the running mate for Lagos PDP Governorship election.

Why can’t Funke Akindele be a running mate to a gubernatorial aspirant? Not educated? No experience? All these noise cos she is an actor????

On the bright side, Funke Akindele is loved and the office of the deputy is not a task she can’t handle . Lady has proven hardworking , determined and successful in her career and she could channel that to Lagos state .

Funke Akindele wanted to start a political career, she started like a Dino Melaye a comedian.

They better scrap PDP and rename that party. 😳

Nigerians are showing support for music artiste, Eedris Abdulkareem, as he is set to undergo kidney transplant in Lagos.

M. I. Ajaga and other prominent artists are already sending prayers and reposting Eedris’ account details.

“The Lakreem Entertainment Inc. Boss has recently been diagnosed with kidney failure and has been undergoing dialysis since the detection at a reputable hospital here in Lagos, Nigeria.

“The date for the transplant surgery is now fixed for the end of this month, July, and all arrangements and texts have been concluded, including certifying the compatibility status of the gracious donor (a family member),” a statement credited to Eedris Abdulkareem and his team read in part.

Nigerian music icon Eedris Abdulkareem (@EedrisOriginal) has been battling with kidney failure and needs our help. The family has a donor, but need funding for the surgery.

Sad to hear that legendary rapper Eedris Abdulkareem was diagnosed with kidney failure and requires surgery! Please donate to save him! Donor gotten already. Fund will be used to settle hospital bills.

May God bless us all abundantly 🙏 pic.twitter.com/7fSkA6KpyJ

So sad to hear that veteran musician, Eedris AbdulKareem is battling a kidney disease.

This is really a trying time.

Praying he gets all the help and finances he can get. Kidney disease takes a huge toll on the person & family.

My prayers and well wishes are with Eedris AbdulKareem at this point,

He's done way too much for the music industry than for our artistes not to support him in this trying time.

They should please contribute to his kidney transplant surgery.

AbdulKareem is a legend ooo.

I really hope people turn up for Eedris Abdulkareem .

Man has done way so much for this music industry.