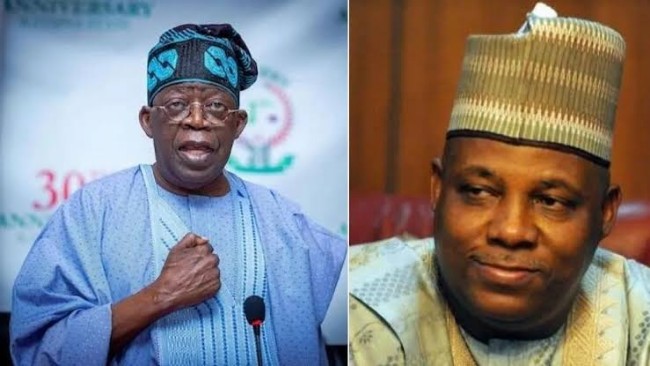 The All Progressives Congress (APC) presidential candidate for the 2023 election, Asiwaju Bola Ahmed Tinubu, has announced Senator Kashim Shettima as his running mate, and Nigerians are reacting to it.

Ripples Nigeria gathered that Shettima would be presented to President Muhammadu Buhari in his hometown, Daura, where he went to celebrate the Eid festival with his family.

Shettima is currently the representative of Borno Central Senatorial District, and was a former two-term Governor of Borno State.

The choice to select Shettima would make APC field a Muslim-Muslim ticket, which is not constitutionally wrong but perceived to be undermining the large presence of Christian faithfuls in Nigeria.

Read Also: SocialMediaTrends: What Nigerians are saying about Wike’s meeting with APC Govs and other stories

A Muslim-Muslim ticket is an insult to fairness, equity and justice. It is see finish. It is impunity of the worst kind.
It is disrespect to people of the federal Republic of Nigeria.

It shows they have little regards for people and think their structure is more valuable.

Tinubu picked Shettima, making the APC a Muslim Muslim ticket. We are not voting for ethnicity or religion. We are voting for MERIT. We are voting against Corruption, ASUU Strikes, Hunger & Poverty, National Grid Collapses, Mad Insecurity, Crazy Inflation, etc. AM I MAKING SENSE?

I am a devoted Muslim, but I say no to a Muslim Muslim ticket. I am with my Christian brothers and sisters on this. Nigeria isn't made for a set of people. Enough of this nonsense.

If we accept that a Muslim-Muslim ticket is fine, will we in all honesty accept a Christian-Christian ticket? I ask this because we need to be very honest with ourselves in this country. If there is no sincerity, how can we achieve the unity & peace we are all talking about?

If you are a Christian just like myself, before you start to play the religious card in respect to Asiwaju Bola Ahmed Tinubu's choice of Senator Kashim SHETTIMA, please read this 👇 pic.twitter.com/BwaknKinmO

Now imagine what will happen in 2019 with Shettima as @officialABAT's VP candidate.

With Shettima as running mate, Tinubu already has Borno, Yobe, Gombe and Bauchi in the bag in North East.

With Kashim Shettima as Asiwaju Bola Tinubu @officialABAT running mate, victory is assured God willing. What I see here is a South West/North East ticket but if all you see is a Muslim/Muslim ticket so be it. Two brilliant minds from the APC

Tinubu is an enemy of the Yorubas,it's just unfortunate that greed won't let some Yoruba people who support him think. I mean how can he even think of choosing Shettima as a vice. How?

The day I respect Sen Shettima was the day he was spewing numbers on channel TV without looking at paper or monitor. You don't do that if you haven't gotten it in you.
Tinubu – Shettima is a formidable duo and unarguably team to beat.

I don’t understand why you guys are surprise Tinubu picked Shettima as his VP, a desperate man is a dangerous man and BAT has proof to be that dangerous man ever since 2006.

Tinubu has not even won the election and he is already undermining the unity of Nigeria. A Muslim Muslim ticket is a slap on the millions of christians in Nigeria. Shame on Shettima

Islamization of Nigeria is getting close… I hope Christians wake up before it's too late.
Shettima as VP?
Magodo Zulum, Reno