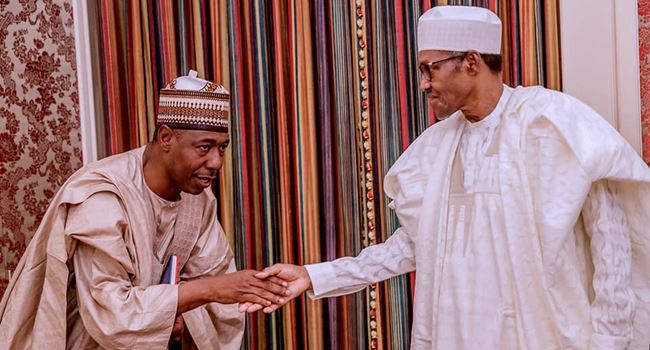 Across social media platforms on Monday, #EndSARS protesters raised the tempo of their agitation against police brutality and bad governance in Nigeria.

In the same vein, concerned Nigerians also voiced their concerns over the nation’s security and education challenges.

The following topics made top trends on Monday:

Online #EndSARS protesters have relentlessly trended the campaign hashtag in readiness to hit the streets soon despite threats by the Federal government to suppress any repeat of the October demonstrations.

Many of the protesters called out the President and his cabinet members for failing to fully implement their #5for5 demands as erring security operatives were yet to be prosecuted.

They also queried the governance style of the present administration, calling for an end to bad governance with the hashtag #EndBadGovernance which trended alongside #Buhari and #EndSarsNow.

The government is dumb

The disposition and harsh language of government towards peaceful protesters is enough to protest against. Up till now, government has not shown commitment to bringing justice to the victims of #Lekki incident. All that I have seen is denial, threat and crackdown. pic.twitter.com/tCFAuJfTZ0

What doesn't Kill a man makes him stronger, no retreat no surrender until there's a positive change in Nigeria, no going back. #EndSarsNow #protest #SoroSoke #Lekki

The country has never been this fragile and vulnerable, this is the worst so far and it can only get worse if these thieves remain in power. #EndSARS #EndBadGoveranceInNigeria #channelstv #protest #Lekki #Dec7

It is delightful that we are beginning to find our voices again with the recent #protest, it is also expedient that we are strategic this time around. Retaining #Endsars as the slogan won't really do much help at this point. Our demand must be clearly stated #EndBadGoveranceNOW pic.twitter.com/QvB8hFvben

Nigerian Students are reacting to the delay by the Academic Staff Union of Universities (ASUU) in calling off their strike action despite the latest offer by the Federal government in line with their demands.

Explaining why that was the case, the Union’s leadership stated that the government was yet to redeem its pledge of N40 billion Paid Allowances, N30 billion for the revitalization of the Academic system and most importantly salary arrears of some of its members.

Having resolved earlier to end the eight-month-old strike if the government implemented their demands before December 2020, ASUU on Monday stated that lecturers would not resume on “empty stomach”.

#ASUU
Lecturers :- if you like don't come to my class, they'll still pay me

Omo left Twitter early in the morning with #ASUU trending and I logged in and still met it trending?Pls it’s not just to crack jokes and create awareness regarding it,it’s the call for the #EndASUUStrike to ignite???

Governor Babagana Zulum of Borno State took the center stage of controversy at midday on Monday for stating that security conditions in the North-East had improved under President Muhammadu Buhari despite the killing of farmers in the war-torn region by Boko Haram insurgents.

The Governor who made the statement while receiving members of the Arewa Consultative Forum on Sunday in Maiduguri was quoted as saying:

“From statewide statistics on affairs in the 27 local government areas since 2011, the fact is that despite the recent happenings in Borno State, the security situation in Borno State and indeed that of the entire North-East sub-region is still far better under Buhari, and this is based on records.”

He further stated that the records were undisputable as previously vulnerable areas in the state like Bama, Gwoza, Askira-Uba, Dikwa, Ngala, Monguno, Mafa and others were declared danger-free under President Buhari’s administration.

“There were daily attacks, bomb blasts in many parts of Maiduguri, the most populated part of the state but all of these have stopped under Buhari. These are the records and no one can dispute these records,” Zulum added

But many Nigerians have taken to social media to react to the Governor’s statements.

If buhari likes, let his people perish before him… We can't cry more than the bereaved

Gov. Zulum said that Buhari has faired better in the fight against insurgency.
this is coming just 2weeks after more than 120 farmers were butchered in their farms

He supports evil,he is evil

I'm not defending Jonathan but during his time boko haram were not bold enough to attack a seating governor, but Zulum that escaped assassination by Boko haram twice a year is now telling us Buhari is doing better.

You can imagine the hypocrisy

Zulum is a "Presidential material".

He should stop bothering us with his cries..

No #EndSARS protest in Lagos – Police