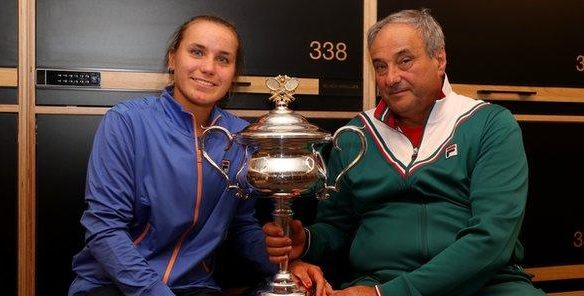 The crowned women’s singles champion at the 2019 Australian Open, Sofia Kenin has heaped praises on her dad after winning her maiden Grand Slam title.

Kenin, who picked up a racquet aged five, emerged as a wonder in the world of tennis as she bagged the title on Saturday after defeating Garbine Muguruza 4-6 6-2 6-2 in the final.

After the very last shot which confirmed her victory, the 21-year-old American raced around the net to the opposite corner of the court to tenderly grasp the hand of her father, who is also her coach.

“Just thank you to him. We can share this forever,” said Kenin after lifting her title in Melbourne.

Alex Kenin, a Russian who is based in New York, had only a little background in the sport when he decided to coach her daughter into becoming what she is today.

“He saw I had talent and we said ‘let’s just go for it and do this professionally for my life’,” added Kenin

“He knows what he is talking about and comes up with the right plans and the right strategies. He just knows it.

“He did it by learning the whole experience. He is crazy smart.”

The champion will rise to seventh in the world when the rankings are updated on Monday.