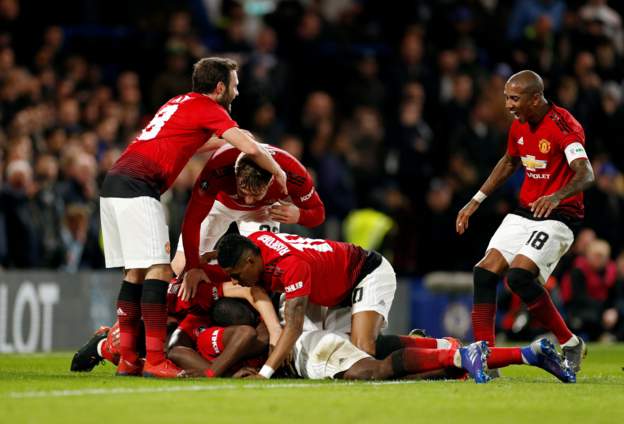 Manchester United reached the quarterfinals of the FA Cup after beating Chelsea in a thrilling fifth round encounter at Stamford Bridge on Monday night.

The Red Devils, who were stunned by Paris Saint-Germain at home in the Champions League last Tuesday, returned to winning ways with a show of tactical superiority.

United got ahead in the 31st minute when Ander Herrera made a great run into the box and headed in a Paul Pogba cross.

Pogba then added a second just before halftime with a clear header from a Marcus Rashford’s cross through the right flank.

Chelsea only managed two shots on target in the first half and none in the second half as they struggled to score – but held stronger at the back to trail 2-0 at full time.

The defending champions, who won 1-0 over United in the FA Cup final last year, will hope to do better when they face Manchester City in the Carabao Cup final later this month.

The defeat at Stamford Bridge on Monday piles up more pressure on Maurizio Sarri, whose side recently lost 6-0 to Manchester City and 4-0 to Bournemouth in the Premier League.

Meanwhile, for interim manager, Ole Gunnar Solskjaer, the victory means he has won 11 games, drawn one and lost one since his arrival at the club in December.

The draw for the last eight was done immediately after the game.

‘A Rolls-Royce of a midfielder’ – Boro, fans heap praises on Mikel Obi