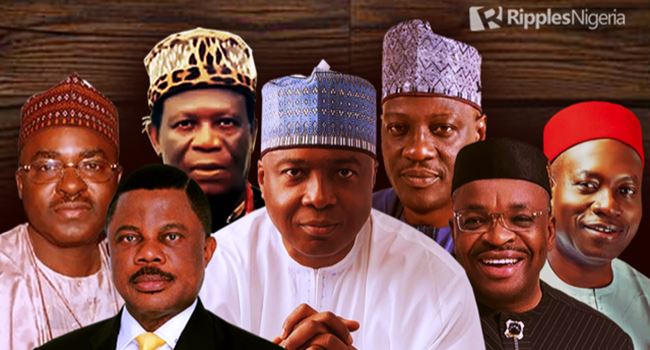 Where do Nigerian bank chiefs and senior executives go to after retirement? some of them switch their apex position in the private sector for retirement at the corridor of power – even the almighty CBN governors are not left out.

They quit their high-paying bank jobs which offers as much as N50 million in annual wage [such as the FUGAZ] to earn about N11.54 million as annual salary – while this might look like peanut to what they are used to, it is not.

Politics: The retirement home for bankers

At the end of their governorship tenure, if they get elected, an humongous sum awaits them after retirement, earning same salary as incumbent, as passed into law by 24 state governors.

A state like Gombe, since 2008, has been paying ex-governors N300 million annually [including other benefits]. In Abia State, ex-governors also share same wage with the incumbent, and are entitled to N57.76 million in allowances every new tenure.

In faraway Sokoto, every four years, ex-governors and deputies earn N200 million and N180 million respectively in salary and benefits, while in Akwa Ibom, N200 million in annual fee is paid, excluding other benefits.

These retirement benefits across the 24 states include at least two cars which are changed every four years, medical fees, landed property, and more – making politics a perfect retirement home for the white-collar bankers used to the luxury life.

Bankers turned governors: A blessing or a curse for states

As top bankers, does their financial management prowess make them a blessing for any state they govern? After their tenure, some left behind a legacy of allegations bothering on corruption, as well as mismanagement.

Some of them spent many years in the banking industry without allegations of financial infractions, but following two terms in the governor’s seat, they were swamped by charges of misappropriation of state funds.

All of five bankers turned politicians listed below are caught up in the web of corruption allegations. This shows the career change might be more of a curse than blessing for the states the financial managers governed, as they didn’t reciprocate their investment management knowledge while occupying the governor’s seat.

Five Nigerian bankers that quit their jobs for governorship seat

Willie Obiano
The 66-year-old accountant was one of the prominent name that left the banking sector to test his hands in the political games in Nigeria, living behind, his career at Fidelity Bank.

Obiano was brought into politics by his former bank chairman, Peter Obi, to become the governor in 2014. Having retained the seat in 2017, he will be retiring soon, as Chukwuma Soludo won the recent governorship election this November.

Under Obiano, Anambra State’s Internally Generated Revenue (IGR) rose to N26 billion in 2019, against the N8.7 billion of 2013 according to the Chairman of the state’s Internal Revenue Service (AIRS) David Nzekwu.

The governor estimated that IGR in the state would grow to N40.36 billion by 2022 – after targeting about N36 billion this year – same period he will vacate the office.

But amid this growth in IGR was the accusation from his predecessor, Obi, that Obiano squandered the N75 billion he left in savings, alleging N25 mil­lion was used to procure non-profit yielding assets such as dining table, and N50 million for seats.

Part of the funds, N30 million, was lavished on a gold bed from the United States, with another gold bed for the governor’s wife at N25 million – but Obiano and his party have denied the existence of such amount in the state’s coffers.

Isa Yuguda
After nineteen years roaming the banking sector, Yuguda decided to switch his bank job for a political ambition, quitting his chief exec job at defunct NAL Merchant Bank in June 2000 to become Minister of State for Transport.

But his political goal was beyond being a minister under President Olusegun Obasanjo, as he contested twice to become governor of Bauchi State, and got elected on both occasion, from 2007 to 2015.

Prior to his political journey, Yuguda had worked for the Federal Mortgage Bank, Savannah Bank, and headed both Inland Bank and NAL Merchant Bank.

During his period as governor, Yuguda grew Bauchi’s IGR from about N1.02 billion in eight months of 2007 to N8.48 billion during the last year of his administration in 2015.

However, his eight years tenure was enmeshed in allegations of abuse of office, money laundering and diversion of public funds according to the Economic and Financial Crimes Commission, which sealed off an estate belonging to Yuguda.

Also, his successor, Muhammed Abubakar, had set up a committee over unaccounted N212.22 billion under Yuguda’s administration, while the committee created by current governor, Bala Mohammed, stated over N200 billion of state funds were “mismanaged or outrightly stolen under the administration of former Governor Isah Yuguda.”

Udom Emmanuel
The Chartered Accountant was brought into politics by Godswill Akpabio in 2013, quitting his job at Zenith Bank to become Secretary to the State Government of Akwa Ibom after over 10 years in the financial sector.

Following his appointment, he contested to replace Akpabio as governor of the state in 2014, and has since held the position since 2015 till date. His second tenure is expected to end in 2023.

Aside from Zenith Bank where he was the Chief Financial Officer, Emmanuel was also on the payroll of Diamond Bank and Price WaterHouse Coopers.

But while his tenure is yet to end, Emmanuel has been linked by the EFCC to a N1.4 billion state fund allegedly laundered by former President of the Nigerian Bar Association, Paul Usoro (SAN).

Usoro was said to have connived with the governor, but, Emmanuel enjoys an immunity from prosecution due to his position, and the Appeal Court ruled that his name be removed from the court papers.

Aside from the EFCC indictment, considering the investment bankers financial prudence, one will think Emmanuel’s administration would be prudent about state resources, however, the office of his SSG claimed to have spent N4.86billion on 15 new Toyota Prado Jeeps (TXL), but N738 million was written down as approved budget for the cars in its Account General’s annual report and audited financial statements for 2019.

So an extra N4.126 billion went through an unknown pipeline, and according to International Centre for Investigative Reporting, the actual worth of 14 Toyota Prado Jeeps was N510 million only, but the state government had claimed that one of the vehicle cost more than N324 million, whereas, it was N34 million as of 2020.

Which means there’s a difference of N228 million locked up somewhere. The SSG, Emmanuel Ekuwem, had ignored explanations from ICIR, and he remains the SSG to Emmanuel.

Abdulfatah Ahmed
Ahmed is one of the senior Nigerian bankers that made it into the Nigerian Governors’ Forum. He became the governor of Kwara State after over 10 years rolling up his sleeves in the banking industry.

He was first appointed into the political sector as Finance Commissioner in 2003 by Governor Bukola Saraki, before he took over the wheels of the state from May 29, 2011 to May 29, 2019.

Before his journey into the political sector, Ahmed worked for defunct District Savings and Loans, Guaranty Trust Bank and Societe Generale Bank Nigeria, which is no longer in operation.

Ahmed was also able to grow his state’s IGR to N30.7 billion when he left in 2019, against the N8.81 billion of 2011, but his successor, AbdulRahman AbdulRazaq, recommended him for prosecution for alleged misappropriation of State assets.

Unlike his industry colleagues that entered into politics, Ahmed was the only one to have been detained by the EFCC for corruption allegations, although he was in the anti-graft agency’s custody for two days in May 2021.

EFCC is investigating him for alleged diversion of N9 billion state funds, while his Commissioner for Finance, Ademola Banu, in January, was arraigned for alleged N411 million money laundering belonging to Kwara State during Ahmed’s tenure.

Bukola Saraki
You’ve read his name in the story of Ahmed, well, he was also a bank executive director, serving at Societe Generale Bank Nigeria, reportedly owned by his father, Olusola Saraki.

His first step into the top political corridor was facilitated by Olusegun Obasanjo, Nigeria’s former President, who appointed Saraki as Special Assistant to the President on Budget.

He later contested for the governorship position in Kwara State, clinching the seat twice, May 29, 2003 to May 29, 2011. But his political career wasn’t devoid of corruption allegations despite IGR rising to N8.81 billion under him.

The current state governor of Kwara State, AbdulRahman AbdulRazaq, recommended the prosecution of Saraki for alleged mismanagement of state assets, but the former banker denied the accusation, stating that he wasn’t called by the commission set up to investigate sales of state assets, to defend himself.

Saraki who became a Senator following his time at the governor’s office, was also dragged into another corruption mess, as his aides were indicted by EFCC in an alleged N3.5 billion money laundering charge from the Paris Club Loan Refund.

In February 2020, the anti-graft agency, EFCC, told Justice Rilwan Aikawa at the Federal High Court in Lagos, that it had evidence to prove Saraki fraudulently diverted N10 billion from the treasury of the Kwara State Government during his eight years as governor.

CBN Governors who retired into the governors office

Clement Isong
You’ve probably heard the popular Yakubu Gowon phrase, “Money Is Not Our Problem, But How To Spend It.”, that was during the era of Clement Isong as CBN governor.

Isong was also said to have stated that Nigeria was so rich in 1971, that the $35 million in annual aid stopped by the United States, was a drop in the bucket of the country’s wealth.

He rose from the position of a secretary to become the CBN governor from August 1967 to September 1975 [during the Civil War, which ended in 1970], then went on to become Cross River State’s first civilian Governor from 1979 to 1983.

Isong used only one term, as his then political platform, National Party of Nigeria (NPN), was against his re-election. His lifetime achievement earned him a place on the N1,000 note.

Charles Soludo
Since Isong became a state governor in 1979, no other CBN head has travelled the same path until Charles Soludo tried his hands twice, losing the first in 2009, as a candidate of PDP in Anambra State.

Soludo, who became the CBN governor from May 29, 2004 to May 29, 2009, contested again for the Anambra gubernatorial seat in November 2021, and was declared winner by the Independent National Electoral Commission (INEC).

So basically, the political records trailing Nigerian top bankers who switched to politics is rather unpleasant, and the baton is with Soludo to change the narrative that states are better off without financial experts managing their resources – making state house more than a retirement home for bankers.