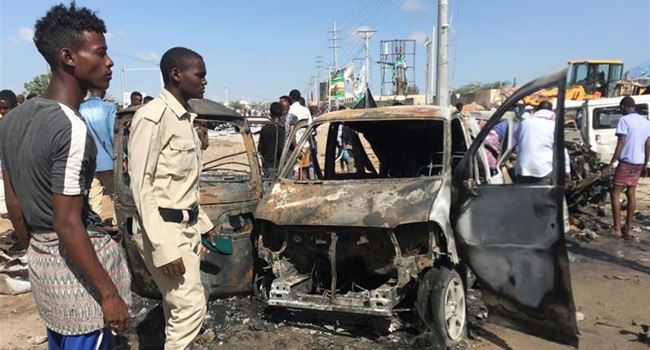 A car bomb attack which targeted a tax collection centre during the morning rush hour in Mogadishu, the capital of Somalia has left no less than 22 people dead and 30 other victims seriously wounded.

A police officer Mohamed Hussein said that close to 100 wounded people among whom were children and several university students who had been travelling in a bus were rushed to hospital after the bomb blast on Saturday.

A large plume of black smoke rose above the capital after the incident regarded as one of the deadliest attacks in Mogadishu in recent memory.

“The blast was devastating. I can confirm that more than 20 civilians killed, there were many more wounded, but the toll can be higher,” said police officer Ibrahim Mohamed.

“I have counted 22 bodies, all of them civilians and there were more than 30 others wounded, this was a dark day,” said Ahmed Moalim Warsame, who witnessed the explosion.

Speaking to reporters at the blast site, Mogadishu Mayor Omar Muhamoud said the government confirmed at least 90 civilians, mostly students, had been injured in the explosion.