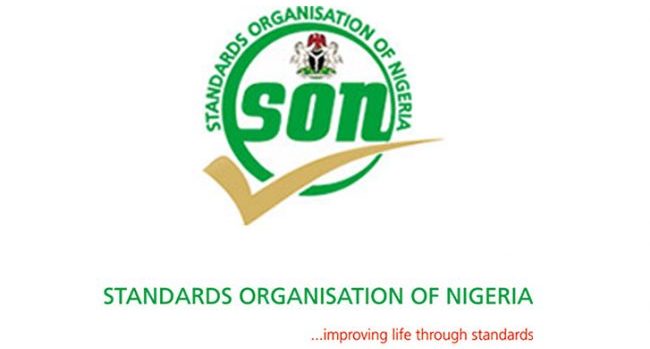 The Standard Organisation of Nigeria (SON) on Saturday closed down 10 illegal engine oil depots in Kano.

The oil depots were caught in the sale of adulterated products.

The Kano state Coordinator of SON, Alhaji Yunusa B. Mohammed revealed the development to newsmen shortly after the operation.

He said the agency would not hesitate to descend on any Lubricant Firm that is selling sub-standard products in Nigeria.

According to him, the sealing of illegal Engine oil firms, would be a continuous exercise, while warning marketers, traders and businessmen to always ensure compliance to standard and genuine products during transactions.

He also added that SON had resolved to fish out, arrest and prosecute people engaging in the nefarious activities of smuggling sub-standard products into Nigerian markets.

The Coordinator who led a Compliance Team to 10 Companies selling raw Engine Oil in the state Capital, said the reason why he ordered for their closure was because they have failed to comply with the Federal Government rules and regulations as projected by SON’s Acts to sanitise their businesses.

He added that, “the raid is a directive from our National Headquarters. It came through the Office of the DG’s Office that we must clear all the unwholesome and sharp practices evident in the Lubricant sector.

“We are instructed to bring to book all those who are dealing with the unblended Engine Oil to book so that the general outcry from the general public in consuming adulterated Engine Oil could be Maximally reduced.”

“If one is to take a cursory look at the entire Engine Oil business in the state one would be left with nothing apart from the glaring Cheating of the populace in the name of raw materials being sold as finished products.”

He further stated that by law, “SON is the agency that is officially mandated to ensure that products are sold out qualitatively. Today we are on lubricants last three Weeks we conducted same exercise on Cables to track defaulters.

“We need stakeholders like you to rise up the anthem by reporting unwholesome acts to the agency so that defaulters would be Penalised at the end of it all.

On why they took the dealers of the adulterated Engine Oil unawares, he said, “that is just the strategy or else you will see nobody if you come for the raid, but at least we have done our best by taking samples from the Companies before we came for official closure.

“You see, the exercise is heavy we can’t evacuate the raw material to our office It’s too enormous. The question the Government is asking always is that if the business is legal then it has to be under controlled. And once that is addressed we have no issue with them.”

“We are going to give them fair hearing, they must come to the office so that we can collectively trash grey areas.”

30 regain freedom from bandits in Katsina