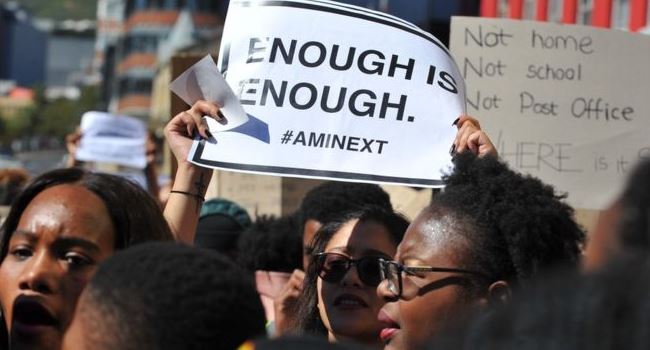 Thousands of anti-rape protesters thronged the streets of South Africa on Friday in demonstrations over the rape and murder of a 19-year old girl in August by a post office employee identified as Luyanda Botha.

Reports say as much as 4,000 protesters wearing all-black, brandishing placards and singing apartheid-era struggle songs thronged the streets of Cape Town to rally over the death of the victim named Nene Mrwetyana and growing violence against women.

In Johannesburg, angry protesters also thronged the Sandton area to demonstrate against what they called a scourge of femicide in South Africa.

“We have failed them in a legal sense, on a societal sense, in our community and in our churches. Every institution in South Africa has failed to protect women. It’s become so endemic in our society that people somehow think this is the norm,” she said.

The ongoing rallies over the rape and murder of the 19-year old follows weeks of renewed activism and protests against gender-based violence in the former apartheid enclave.