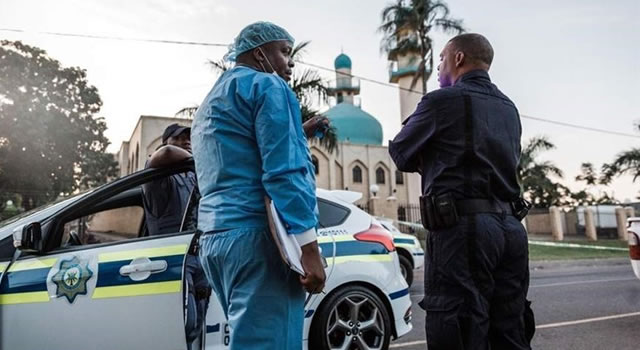 A tragic scene played out at a mosque near South Africa’s tourist city of Cape Town when a knife wielding man attacked worshipers at the religious centre, stabbing two victims to death and injuring another.

The suspect who is believed to be in his 30’s was however shot dead by police officers who later arrived the scene of the incident.

According to the Muslim Judicial Council, worshippers were performing “l’tikaf” or seclusion in the mosque when the knifeman entered and joined congregants in morning prayers before launching an attack.

Read also: WHO says it is still battling with Ebola in DRC

“Just after 3 a.m., when the worshippers retreated to rest, the assailant attacked the imam first and then murdered the members who came to the imam’s defence,” it said in a statement.

Police said the attack near Durban showed “elements of extremism”. They did not comment further on the motive behind the killings in Malmesbury, a small farming town 40 miles (65 km)north of Cape Town.

The attack is coming a month after three men armed with guns and knives slit the throats of three worshipers at a mosque north of the port city of Durban, killing one person and seriously injuring two others in the process.

China joins EU, imposes $50bn worth of tariffs on US as trade war looms