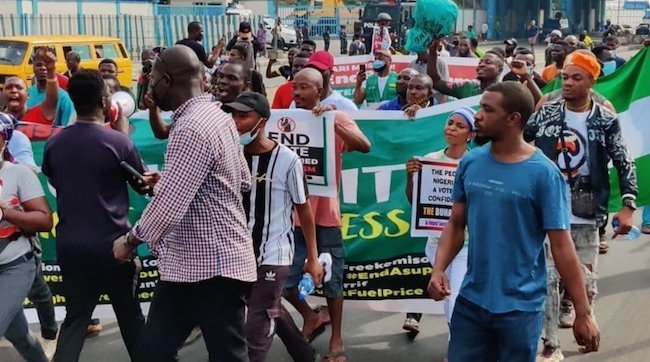 Residents of states in the South-East on Saturday shunned the June 12 rally organized by youths to protest bad governance and worsening insecurity in the country.

This was in contrast to the situation in the South-West where security operatives struggled to maintain law and order in cities across the region.

Unlike the sit-at-home order given by the proscribed Indigenous People of Biafra (IPOB) which recorded total compliance in the South-East, people of the region went about their daily businesses on Saturday.

Ripples Nigeria had reported how the police took over the Freedom Park in Ojota, Lagos, venue of Saturday’s rally in the state.

But a few hours later, the protesters dared the security agents and trooped to the streets.

They were forcefully dispersed by the security agents and regrouped shortly thereafter in different parts of the city.

In the South-East, it was business as usual as people went about their daily routine.

In Awka, Anambra State, the atmosphere was peaceful and orderly as people opened their shops and offices for business activities.

There was also calm in Owerri, Imo State, which is the hotbed of insecurity in the region.

In the city, residents carried out their businesses without molestation.

Protesters were also conspicuously absent on the streets of Aba and Umuahia in Abia State.

Meanwhile, there were ugly scenes in Ibadan, Oyo State, as protesters marched through the streets and demanded President Muhammadu Buhari’s resignation.

Why we dispersed June 12 protesters in Abuja – Police