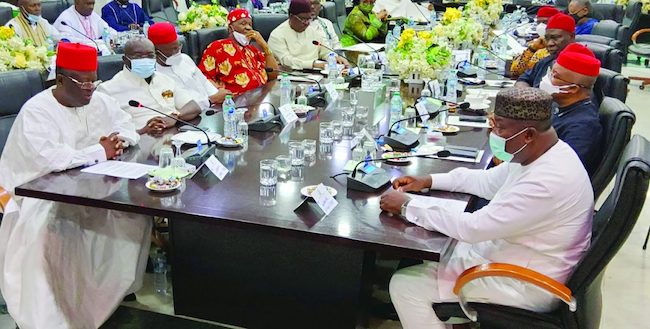 South-East Governors and other stakeholders met on Sunday in Enugu to address the worsening security challenge in the region.

One issue that came up for discussion at the meeting is the domestication of the newly established regional security outfit, Ebubeagu in each of the five states in the South-East.

In a communiqué issued at the meeting and read by the Ebonyi State Governor, Dave Umahi, the governors restated their adoption of the security with its headquarters in Enugu.

They also agreed that the Ebubeagu would work with the police and other security agencies to protect lives and property in the South-East.

The communiqué read: “The meeting is in support of restructuring, the setting up of State Police and other national issues as discussed at the last NEC meeting.

“A committee has been set up to work out acceptable modalities and submit the same to NEC in its next meeting.

“The governors agreed on the structure and operational modalities of Ebubeagu and also set up an advisory board for the security outfit.

“The Attorney Generals and Commissioners for Justice of the states in the zone had been directed to amend existing state laws to give legal backing to the joint security outfit.

“The President-General of Ohaneze Ndigbo, Prof. George Obiozor, had been directed to form two committees that would ensure peaceful coexistence in the South-East. The committees are:

(b) Strategy and Welfare Committee to engage our people, especially those who are being unfairly treated.

The committees must be functional within the next 10 days from the date.

“The meeting restated the ban of open grazing in the region and urged the security agencies and vigilante groups to enforce the ban in all the states.