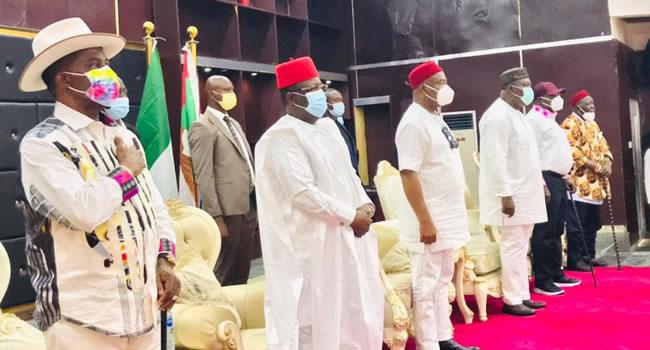 Governors of the South-East region on Sunday held a meeting in Owerri, the Imo State capital over the security situation in the zone.

The meeting was made known by the Imo State Government in a tweet, saying “Southeast Security Summit currently ongoing at Owerri, Imo State. All 5 South-East Governors present at the meeting.”

Governors of the five states in the region attended the meeting.

Commanders of the Nigeria Navy and Air Force, the Inspector-General of Police, leaders of the Ohanaeze Ndigbo, and other stakeholders were also at the meeting.

The Chief Press Secretary to the Imo State Governor, Oguike Nwachuku, disclosed this in a statement in Owerri.

The state government also confirmed the meeting on its Twitter handle.

The hoodlums also attacked the headquarters of Imo State Police Command and razed several vehicles on the premises.

Pope celebrates mass of ‘mercy’ with prisoners, refugees from Nigeria, others