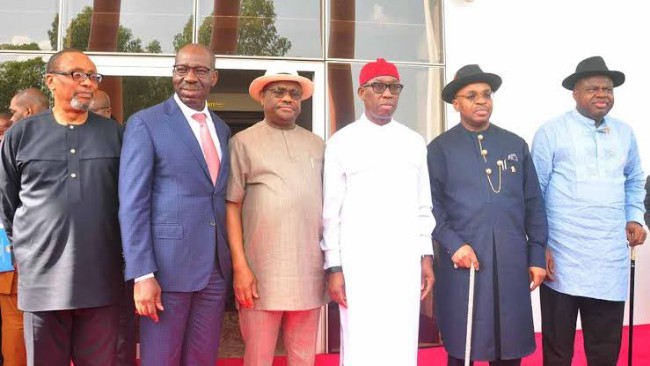 Five out of the six governors of the South-South geo-political zone on Monday morning, arrived at the Rivers State Government House, for a crucial meeting.

Although the agenda of the meeting is yet to be disclosed, sources have said the top issues to be discussed in the meeting could be the Value Added Tax (VAT) controversies and the zoning of the presidency to the south in 2023, among others.

The first governor to arrive at the Government House was the Governor of Edo State, Godwin Obaseki, followed by his Delta State counterpart, Ifeanyi Okowa, Emmanuel Udom of Akwa-Ibom State, and Douye Diri of Bayelsa State followed shortly after.

Ben Ayade of Cross Rivers State is the only governor who has not yet arrived as at the time.of this report. However, there are speculations that he may not attend the meeting due to his recent defection to the ruling All Progressives Congress (APC).

This comes amid an ongoing face-off over revenue collection, especially VAT and stamp duty.

The Federal Government had on Sunday disclosed that it would on Monday (today) begin a public hearing for a new revenue allocation formula.

The Revenue Mobilisation Allocation and Fiscal Commission (RMAFC) disclosed in a release issued in Abuja that the process would kick off with a two-day public hearing in Lagos.

The Southwest public hearing would officially kick off the nationwide consultations expected to lead to a new revenue sharing formula for the country. The states expected to participate are Lagos, Ekiti, Oyo, Ogun, Ondo and Osun.

The public hearing for the South-South zone is expected to hold in Rivers State between October 7 and October 8, with participants expected from Rivers, Akwa Ibom, Bayelsa, Cross River, Delta and Edo states.

Also, the Southeast states are expected to hold their public hearing in Imo from October 11 to October 12.

The Federal Government currently takes 52.68 per cent of revenue generated in the country; states get 26.72 per cent, while the 774 Local Governments get 20.60 per cent.

RMAFC noted that under the current sharing arrangement, the current review would focus only on the vertical allocation, which covers allocation to the Federal, States and Local Governments and does not imply a reduction in the cost of governance.

It added that the review is in pursuant of the constitutional mandate that empowers it to “review from time to time, the revenue allocation formula and principles in operation to ensure conformity with changing realities.”

Related Topics:APCRMAFCSouth South
Up Next