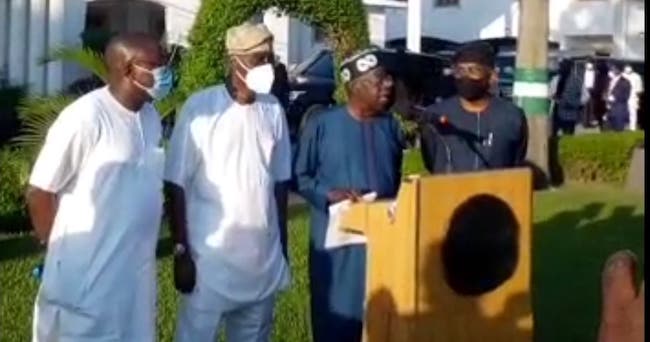 The All Progressives Congress (APC) leaders in the South-West on Sunday rejected the secessionist agitations in the country.

In a communiqué issued at the end of a meeting held at the State House in Marina, Lagos, the APC leaders restated their belief in one Nigeria.

They also urged the Federal Government to ensure devolution of powers to the federating units to address Nigeria’s instability.

Also at the meeting were the former APC Vice- Chairman, South-West, Pius Akinyelure; a former Minister of Agriculture, Water Resources and Rural Development, Gen. Alani Akinrinade (retd); and Minister of Industry, Trade and Investment, Otunba Niyi Adebayo; among others.

The leaders also endorsed the ban on open grazing by Southern governors and asked the federal government to make loans available to farmers for ranching in the states.

The communiqué read: “Concerned about the state of the nation particularly the serious security challenges facing the country, All Progressives Congress leaders in the South-West met in Lagos on Sunday, May 24, 2021.

“The meeting was characterized by open and frank discussions of the difficulties now facing Nigeria.

“Based upon these deliberations, the following points of agreement were reached:

“The leaders commiserate with and condole with the President and Commander-in-Chief, President Muhammadu Buhari, the military authorities, families of the Chief of Army Staff and other officers who died, and indeed the entire nation over last Friday’s tragic plane crash in Kaduna.

“They express their strong opposition to separatist agitations and hate speeches. While urging those indulging in such to desist forthwith, they renew their belief in the unity, stability and sustainability of the country.

“We note with significant concern the security situation in the country. Terrorism and violent criminality threaten many areas, adversely affecting the lives and livelihoods of too many innocent and peace-loving Nigerians. While mindful of the resource and other constraints facing the nation, we urge the federal government to continue to make the necessary expenditures and allocate sufficient resources to enable the military and security agencies to tackle the difficult security challenges confronting us.

“For Nigeria to overcome these challenges, we must do so with unity of purpose and action. The desire for peace and the chance for a prosperous and just society is universal and transcends all regional, religious or ethnic divisions.

“Sadly, many public figures have made statements that spark division and undermine the needed unity of purpose. We urge government at all levels, security agencies, and public leaders across the country to do everything possible to prevent tension so that we sustain the necessary unity to defeat these challenges to our national security.

“All responsible Nigerians must speak and act in a manner that strengthens our common cause against these common threats to our collective peace, justice and development.”