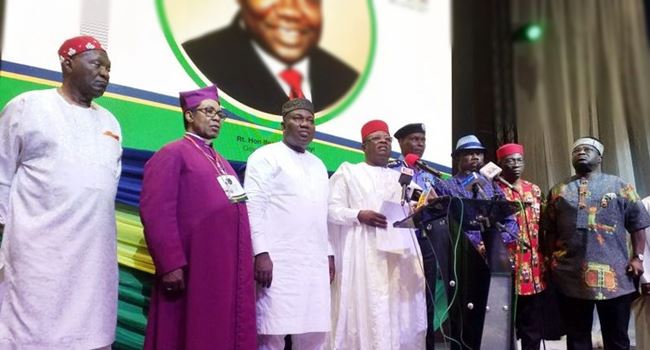 Governors of the Southeast geopolitical zone and the apex Igbo Sociocultural organisation, Ohanaeze Ndigbo, on Wednesday took different positions on how to approach the growing insecurity in the region.

While the governors chose to go along with Community policing initiative of the Federal Government, Ohanaeze Ndigbo insisted on the formation of a regional security outfit to be known as Ogbunigwe.

The governors and the leadership of Ohanaeze Ndigbo made their different positions known at the end of the South-East Security Summit held in Enugu with the theme, ‘Strategic Partnership for effective Community Policing in the South East Geo-Political Zone.’

Governor David Umahi of Ebonyi State, who chairs the South East Governors’ Forum, read the position of the governors at the end of the summit organised by the Nigeria Police, saying that they were satisfied with the strategies for the implementation of the community policing programme in the zone.

Umahi said: “We reached a satisfactory and acceptable decision and agreement.

“The IG’s presentation was not different from “our neighbourhood watch, our vigilante operation and forests guard, the herdsmen and farmers peace community among others. “When we saw that this is totally in tandem with what we are doing, we decided as your governors to embrace the initiative of community policing.”

However, the President General of Ohanaeze Ndigbo, Chief Nnia Nwodo, called on the Federal Government to allow the South-East to establish their own security to take care of their challenges and peculiarities.

Nwodo said: “Mr IGP, our farms have been devastated and the herders that devastated our farms carry AK-47 rifles. You cannot be talking about community policing when the people you want to supervise, you do not understand their language.

“Your legal architecture doesn’t take into consideration that our governors, by the constitution, are the chief security officers of their various states, and this gives them the responsibility to protect the lives and property of their citizens. So when you begin to talk about recruitment, with the commander and control, and you do not share with the governors and representatives at the local areas this command and control and recruitment, this exercise is dead on arrival.”

The Inspector General of Police, Muhammed Adamu, while addressing the summit said: “The community policing model is one that will draw on the legal opportunities provided by the Police Act for the engagement of special constables who will be engaged as community policing officers under the coordination of the Nigeria Police Force toward evolving a community-focused policing architecture.”