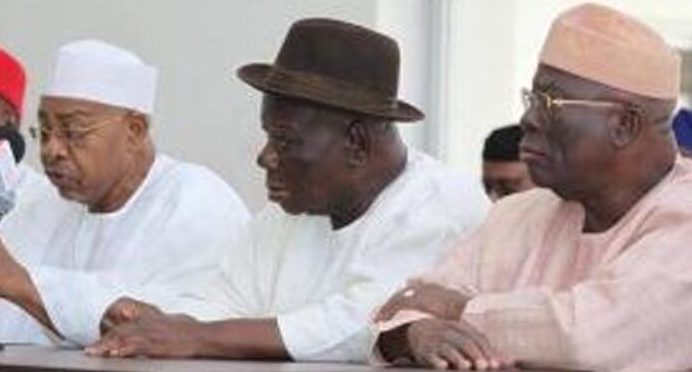 The leaders of the Southern and Middle Belt Forum (SMBLF) on Friday insisted on a power shift to the Southern part of the country in 2023.

In a communique issued at the end of their meeting in Abuja, the leaders urged Nigerians to vote for southern presidential candidates and not their northern counterparts next year.

The group also warned the All Progressives Congress (APC) and the Peoples Democratic Party (PDP) against dumping the zoning idea by fielding candidates from the north in 2023.

They, therefore, warned that the reported permutations by the main political parties to foist Northern presidential candidates on the nation would be a grave misadventure with grim consequences on national concord and harmony.

The PDP had last week abandoned the zoning principle and decided to throw open the 2023 presidential race for politicians from all the geopolitical zones in the country.

The communique read: “We, therefore, call on all delegates of all political parties, and true lovers of democracy, as a sacred obligation, to reject presidential aspirants, or candidates, from the North, and only vote for those from the South in the party primaries.

“The Forum firmly reiterates its stance on the Principle of Zoning and Power Rotation between the North and the South, as the basis on which the Nigerian Federation has, since Independence, been premised.

“It states, unequivocally, that the Zoning and Rotation of the Presidency of Nigeria are fundamental to the future existence of the country.

“It also condemns, in strongest terms, obvious schemes by the two main political parties, the PDP and APC, ahead of their Presidential Primaries, to jettison the time-honoured principle of Rotation, which has traditionally served as the glue holding the Federal Republic of Nigeria together.”