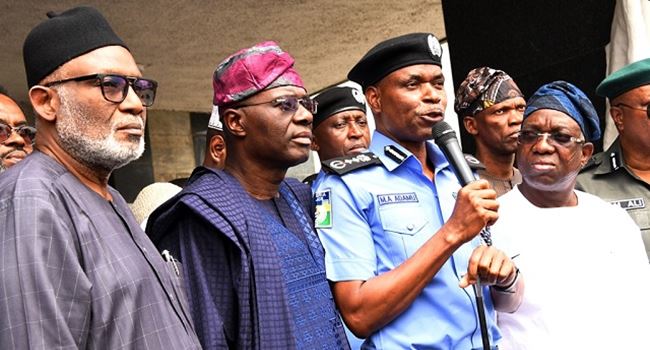 Governors of the Southwest states and the Inspector General of Police, Mohammed Adamu, have finally agreed on the recruitment, training and operation of the Western Nigeria Security Network (WNSN), codenamed Operation Amotekun.

This was disclosed on Thursday in Lagos after a Southwest security meeting convened with the IG by the chairman Southwest Governors Forum, Rotimi Akeredolu.

Amotekun, which has received the endorsement of all the governors in the zone, also got Adamu’s endorsement at the meeting.

Akeredolu had told Adamu at the meeting that held at Banquet Hall of the Lagos State Government Secretariat, Alausa, Ikeja, that the development would facilitate efforts at securing local communities.

According to the IG, Operation Amotekun will no longer run as a regional operation, but will be individual state led.

The meeting also ratified the community policing model proposed by the IG, while also agreeing that the initiative would be complementing Operation Amotekun and conventional police operations in all local communities.

Akeredolu, while speaking to newsmen on the outcome of the meeting, said: “The governors of South-West and the IGP have held a very fruitful discussion and it is clear now to all of us that community policing, which the Nigeria Police is anchoring, is one that will benefit all of us. We have chosen that we will embrace community policing in its entirety.”

On his part, Adamu said: “This is the second meeting we have held with the governors of South-West region concerning the creation of Operation Amotekun. The just concluded meeting was to discuss and fine-tune Amotekun. Our conclusion is what the chairman of South-West Governors’ Forum has explained.

Adamu also disclosed that the police would be part of the recruitment, training and deployment of personnel to be assigned for Amotekun operations, adding that the initiative would complement community policing model.