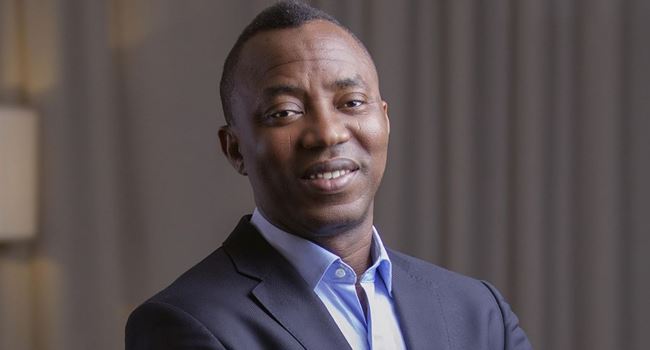 The presidential candidate of the African Action Congress (AAC), Omoyele Sowore, on Thursday caused a stir at the Abuja venue of the signing of a peace accord by presidential aspirants of political parties ahead of the 2023 elections.

Sowore in a video posted on his Facebook page was seen confronting Major Hamza Al-Mustapha (retd.) the presidential candidate of the Action Alliance (AA) who was the former Chief Security Officer to late General Sani Abacha.

According to the activist, he was telling the former CSO “some truths”.

He noted: “At the presidential “Peace Accord” signing ceremony event in Abuja, a chance to tell Abacha’s henchman Al-Mustapha some truths! … Kashim Shettima ought not be allowed to sit where presidential candidates should sit…I challenged him too!”

He also berated his counterpart in the All Progressives Congress (APC), Asiwaju Bola Ahmed Tinubu, for being absent at the venue for the signing of peace accord held at the International Conference Centre in Abuja.

“I confronted him (Shettima). Why is he sitting here when Tinubu is not here? If I was sitting there, I would not stand up for him, because Tinubu is the one who is supposed to be here. You can’t be running in Nigeria for presidency in absentia,” he asserted.

Meanwhile, Sowore had earlier in an interview on Arise TV ‘Morning Show’, aired on Thursday, kicked against the peace accord signing, asking why such should hold when the country is not at war.

He said: “I don’t know why we’re signing this peace accord when we are not at war. This signifies that Nigeria is at war. Elections are a war in this country.

Read also: ‘Nigerians still see me as a credible alternative to Tinubu, Atiku, others in 2023,’ Sowore claims

“For the sake of symbolism of this, I will show up there, and sign whatever they want so that the people can understand that I subscribe to peace during the election and after the election.”

At the event, presidential candidates of political parties vying for elective positions in the forthcoming general election signed an agreement for a peaceful conduct before, during and after the 2023 elections.

The peace accord was put together under the auspices of the National Peace Committee (NPC) co-led by former Head of State, General Abudulsami Abubakar; Sultan of Sokoto, Sa’ad Abubakar II; Cardinal John Onayeikan; Bishop Hassan Kukah and other eminent statesmen with the objective of supporting efforts at ensuring free, fair and credible elections in Nigeria.

PDP say N122m returned by Orbih, Arapaja, others not bribe, but housing allowances