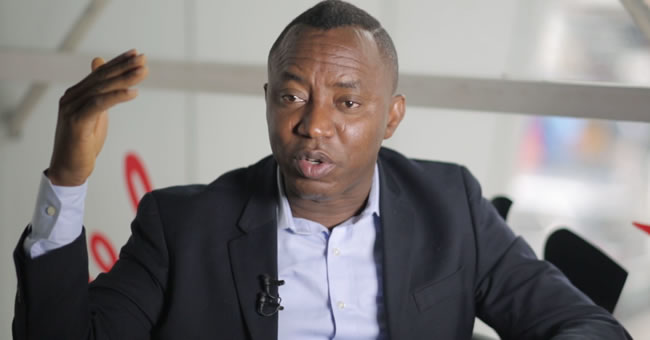 The convener of #revolutionnow and former presidential candidate, Omoyele Sowore, Thursday filed a contempt suit against the Director-General of the Department of State Services (DSS), Yusuf Bichi.

Sowore’s legal team led by Femi Falana also filed an affidavit of compliance with the order of the court and had the same served on the DSS.

Recall that Sowore was granted bail on Tuesday by Justice Taiwo Taiwo of the Federal High Court in Abuja. The judge had dismissed DSS’ objection in granting him bail with the sole condition that he deposit his passport in the registry of the court.

Sowore, through his lawyers, submitted his passport to a Deputy Chief Registrar of the court on Wednesday. His legal team also filed an affidavit of compliance with the order of the court and had same served on the DSS.

The DSS has however refused to release him despite meeting the bail conditions.

In the bid to enforce the release order, the detained politician filed a ‘Notice of consequence of court order’ against the DSS boss, seeking his committal to jail unless he gave effect to the order of the court.

The DSS boss in the contempt notice form was warned that unless he “obey the direction contained in the order of the Federal High Court of Justice, Abuja delivered on September 21, 2019, which ordered you to release the applicant in Suit No: FHC/ABJ/CS/915/2019 forthwith, you will be guilty of contempt of court and will be liable to be committed to prison. A copy of the said order of court earlier served on you is hereby annexed for your on-the-spot reference.

“This court has been Informed that even as at today, Thursday, September 26, 2019, you are yet to comply with the lawful order of the Federal High Court by refusing to release the applicant namely: OMOYELE SOWORE, in your custody. You are hereby directed to comply with the court order forthwith or you will be guilty of contempt of court.”

Why we haven’t released Sowore —DSS