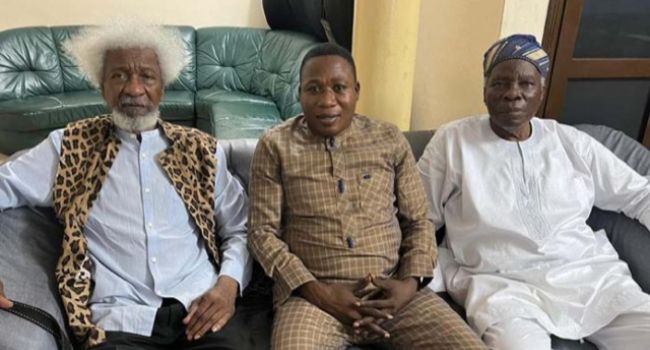 Confirming the visit, Soyinka’s media office in a statement, said the elder statesman who visited the agitator in the company of leader of the Yoruba self-determination group, Ilana Omo Oodua Worldwide, Banji Akintoye, was in Cotonou to celebrate the Eid-eI-Fitr with the activist.

According to the playwright’s media team, the erudite scholar was reportedly mobbed by a crowd of Nigerians who thronged the venue of the meeting to meet and greet him and his entourage.

Though the team did not divulge the details of the meeting, Soyinka was reported to have said he was in Benin to “break the Muslim fast with our son.”

“Ramadan is as good as any other season to express non-denominational solidarity,” he reportedly said.

He also added that he was in the West African country to sympathize with Igboho over his predicaments with the security agencies who arrested him last year and clamped him in detention before he was released in March on health grounds.

Last year, Soyinka had called on the Federal Government to release Igboho as he did not do anything to warrant being in detention as all he did was to call for the freedom of the Yoruba race.