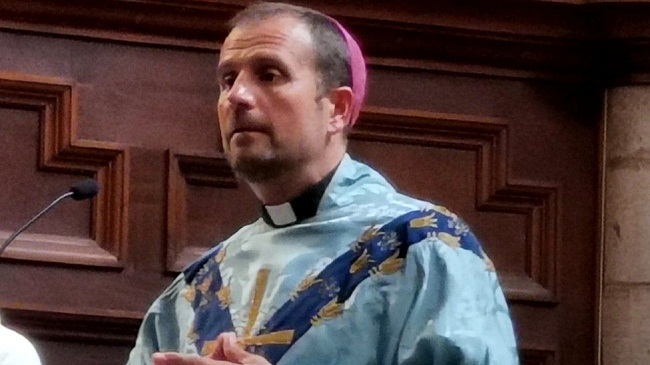 A Spanish Bishop of the Roman Catholic Church, Xavier Novell, has quit the priesthood after he fell in love with a woman who writes Satanic-tinged erot*c fiction.

Novell became Spain’s youngest Bishop at the age of 41, when he was appointed in 2010 but resigned last month, citing strictly personal reasons without going into detail.

Seen as a rising star in Spain‘s Catholic Church, Novell’s decision was said to have gotten the Vatican’s approval after he hugged controversies following his open support for conversion therapy for gay people and carried out exorcisms.

He was said to have met several times with Vatican officials as well as the Pope himself, before announcing his resignation.

Novell was traditional in his remarks on abortion but his strident views on homosexuality and outspoken support for Catalonian independence were seen as quite controversial.

But it came as a shock when the reason for his resignation was revealed showing that he had fallen for divorcee Silvia Caballol, a psychologist and erot*c novelist.

A report also revealed that the former Bishop was now looking for a job in the Barcelona area as an agronomist.

Caballol’s books include titles such as ‘The Hell of Gabriel’s Lust’ and the trilogy, ‘Amnesia”.

In the blurb for one of her works, the reader is promised a journey into sadism, madness and lust, and a struggle between good and evil, God and Satan, with a plot to shake one’s values and religious beliefs.

Neither the ex-bishop, who is now 52, nor the novelist have responded to the reports although media reports have quoted him as saying:

“I have fallen in love and want to do things properly.”

The issue has again raised the issue of celibacy within the Church.

In earlier interviews, Novell admitted that in his youth, he had fallen in love with an 18-year-old girl and he had later wanted to marry and have children before deciding on a different path.

His change of heart has prompted grumblings within the Church with Dominican nun Lucía Caram saying he was “out of his mind” and criticised his promotion of “conversion therapy”.